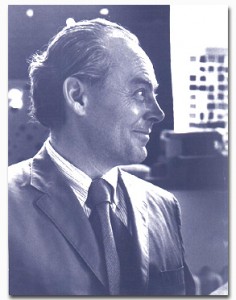 The man’s worldly title is Institute Professor. He was a member of the National Institute of Arts and Letters, a doctor honorus causa. He was the director of the Center for Advanced Visual Studies at the Massachusetts Institute of Technology in Cambridge, Massachusetts. Gyorgy Kepes is the artist whose work and thought embrace nature and technology; whose understanding of the determining factors of the energy field in which modern man day-dances, leads him to seek harmony of seemingly opposite forces—and whose charismatic thought-prayers for a saner world have gathered around him for decades now a people of listeners, followers, admirers and disciples.

The enormous number of friends and acquaintances is not accidental. During all the mature stages of his life, Gyorgy Kepes has been a man whose thoughts, dreams and work concentrate on the betterment of others’ lives by way of redirecting their education, conditions of living and working, and their immediate as well as large-scale environments. He has naturally sought, found, enjoyed and sometimes endured the company of those who are similarly inclined—beginning with L. Kassak, the Hungarian artist-writer who impressed Gyorgy Kepes when he was young. Another focal force was Laszlo Moholy-Nagy who encouraged a long-lasting mutual cooperation on shifting scenes, such as Berlin, London, Chicago; and Bela Bartok and Albert Szentgyorgyi have been cherished idols.

Much of Kepes’ work can now be easily subsumed under the category of “Environmental”: Neon reliefs for Radio Shack; acoustic tiles for U.S. Gypsum; the programmed light mural in KLM’s 5 th Ave. office in New York City; lighting sculptures for Roehm and Haas’ Philadelphia headquarters; a Light Corridor for the Milan Triennale.

The complexity of his work ranges from the intimate scale of book design to the large scale of his proposed Sylvania light environment and, for the Boston Harbor Project, a multi-systematic and multi-elemental Denkmodell. His executed work and his projects are closely related to the work of Gyorgy Kepes the educator, the author and editor of many books on art anchored in “the world” and on understanding the world aided by art.

The total mobilization of creative energies is a Renaissance ideal come to new life after decades of a specialism craze. He has relifted the Cartesian “I ask ergo I am” to an existential level. To me he is the last visionary.

—By Otto Peine, Artist and Director Emeritus of the Center for Visual Studies, MIT