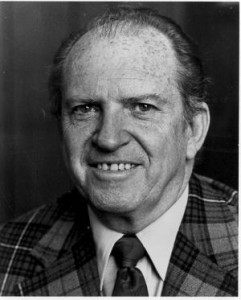 A former president of the Starr King School, McKeeman also ran for the presidency of the Unitarian Universalist Association (UUA). Known variously as “Bucky” and “Mac” he was born in Lynn, Massachusetts on September 12, 1920, the oldest child of William and Lena (Goodridge) McKeeman. His father was a letter carrier, and the family lived on the upper floor of a triple decker. McKeeman went to a Congregational Church as a child, but his father was interested in spiritualism, and referred to himself as a “Home Baptist.” As a child, young Gordon went to local public schools, and graduated from Lynn English High School. In Junior High School, McKeeman began to attend the First Universalist Church in Lynn, where all his friends were going, and he fell under the influence of Alice Harrison, the Director of Religious Education.

McKeeman became the first person in his family to attend college, and finished under some financial duress with a B.S. in education from Salem State Teachers College (Massachusetts) in 1942. During his college years, McKeeman began to date Phyllis Bradstreet. They were engaged in 1940 and married in 1944. Throughout his career, Phyllis played a prominent role in most every endeavor, and when the UUA awarded its Distinguished Service Award in 1993, the McKeemans were co-recipients. Together they had three boys.

During the war, he received a student deferment so that he might attend the Tufts University School of Religion. He graduated with a S.T.M. in 1945, after having served as a student minister in South Acton, Massachusetts. In 1944, he received a full call to the All Souls Universalist Church in Worcester, Massachusetts, where he remained until 1950. During his Worcester ministry, a group of young Tufts graduates formed an organization in his living room called the Humiliati. This group tried to revitalize Universalism with a liturgical vitality, including the symbolism of an off-centered cross reflecting that Universalism was “more than Christianity with a difference.” After that McKeeman moved on first to Stoughton (1950-1955) and then to Palmer (1955-1961), Massachusetts. Phyllis became especially active with the Girl Scouts in Stoughton, and Gordon became a community leader in Palmer, where the church constructed a new fellowship hall during his ministry. In Palmer he served on the hospital board, and was president of the local Rotary club.

In 1961 McKeeman was called to a large, dynamic congregation in Akron, Ohio, where he remained until 1983. During this time he began to be more active in the denomination. He began two terms on the UUA Board of Trustees in 1969, and was its vice moderator from 1975-1977. He also began a ten-year period of service on the board of the Unitarian Universalist Service Committee (UUSC) in 1969, including being its president from 1973-1977. In 1976 McKeeman decided to run for the presidency of the UUA, and became part of the “Jack (Mendelsohn), Paul (Carnes) and Bucky Show” all over the continent, with Carnes winning in a close election. After Carnes died in office, the UUA Board had to pick a successor until the next election. McKeeman lost in a close election to Eugene Pickett. McKeeman also served as a ministerial settlement representative in the Ohio Meadville District of the UUA from 1970-1983. During a preaching engagement on the West Coast, several people approached McKeeman about serving as president of the Starr King School, after he had agreed to serve on an presidential advisory group the previous year. Eventually the search committee chose McKeeman, and he spent five years (1983-1988) as the president, helping to put the school on a more sound financial base. After that he retired to Charlottesville, Virginia.

In his religious odyssey, McKeeman wrote, “I believe in institutions. I even believe in the conservative mission of institutions. I believe institutions, if they are to fulfill their purpose, must be conservative. But to be viably conservative, they have to change.” McKeeman said that he always hoped some other job than minister might leap off the want ad pages in the Sunday newspaper, but he never found anything else he was qualified for. He edited several volumes of devotional materials including a UUA meditation manual of Universalist materials, To Meet the Asking Years (1984). He received the UUA’s religious education Angus H. MacLean award, and he was the Berry Street essayist in 1993. He and Phyllis were honorary co-chairs of the celebration of the 200th anniversary of Universalism. He received an honorary D.D. from Meadville Lombard Theological School in 1969.

Read More About It:  HSL holds the digital archives for the Humiliati