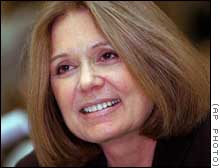 As a writer and an activist, Gloria Steinem has been a leader in the late-twentieth-century women’s rights movement. Among her many achievements is the founding of Ms. magazine—the first national women’s magazine run by women.

Feminist and journalist Gloria Steinem was active in many liberal causes beginning in the mid-1950s and was the first editor of Ms. magazine. She became a leading spokesperson for the feminist movement and helped shape the debate over women’s enfranchisement.

Steinem’s experience in India broadened her horizons and made her aware of the extent of human suffering in the world. She realized that the high standard of living most Americans take for granted was not available to all. She commented at the time that “America is an enormous frosted cupcake in the middle of millions of starving people.” She returned strongly motivated to fight social injustice and embarked on her career as a journalist.

In 1960 she moved to New York and began writing freelance articles for popular magazines. She also did some scriptwriting for the popular television show That Was the Week That Was. One of her first major assignments in investigative journalism was a two-part series for Show magazine on the working conditions of Playboy bunnies. In order to do research for the article, Steinem applied for a job as a Playboy bunny and was hired. She held the position for three weeks in order to do research. The article that she wrote as a result of her experience exposed the poor working conditions and meager wages of the women who worked long hours in the lavish clubs where rich men spent their leisure time.

By the late 1960s Steinem had gained national attention as an outspoken leader of the women’s liberation movement, which continued to grow and gain strength. In 1971 she joined Bella Abzug, Shirley Chisholm, and Betty Friedan to form the National Women’s Political Caucus, encouraging women’s participation in the 1972 election. Steinem herself was fighting for an abortion plank in the party platform and challenging the seating of delegations that included mostly white males.

In that same year of 1972 Steinem, as part of the Women’s Action Alliance, gained funding for the first mass circulation feminist magazine, Ms. The preview issue sold out, and within five years Ms. had a circulation of 500,000. Steinem was inducted into the Women’s Hall of Fame in 1993. Her books, Outrageous Acts and Everyday Rebellions, as well as Revolution from Within: A Book of Self Esteem, are best-sellers. In 1998, she was inducted into the American Society of Magazine Editors Hall of Fame along with Hugh Hefner of Playboy.

Click here for supplemental reading about Gloria Steinem on Amazon.