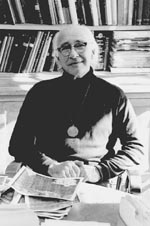 Biology lost one of its towering figures of the twentieth century with the passing of George Wald. Wald’s findings represented the first instance that a biochemical role for a fat-soluble vitamin was established and widely recognized. Wald was elected to the National Academy of Sciences in 1950 and was awarded the Nobel Prize in physiology or medicine in 1967 for his monumental contributions to our understanding of the molecular basis of photoreception.

In addition, Wald was a marvelous teacher, lecturer, and writer. Time magazine named him “one of the ten best teachers in the country” in a cover story. He wrote and lectured on a wide variety of topics, from the “Origin of Life” and “Life and Mind in the Universe” to political issues. The Vietnam War horrified him, and he was deeply involved in anti-war and anti-nuclear activities. He considered his political actions as part of being a biologist: one is concerned with life.

George Wald was born in New York City on November 8, 1906. The son of immigrant parents, he grew up in a Brooklyn working-class neighborhood. College introduced him to art, classical music, and literature, and he became enamored of them all. He applied to Columbia University for graduate studies in zoology and was accepted. As a graduate student, Wald worked on the visual performance of Drosophila. He found that in many ways fruitfly visual function resembles that of other animals, including man.

Wald assumed his first academic position as tutor in biochemical sciences at Harvard in 1934. He remained at Harvard his entire academic career. Wald’s experiments on the visual pigments were interrupted by World War II, during which time he worked on applied vision research projects for the U.S. Army Board of Engineers. At the conclusion of the war, Wald returned to studying visual pigment molecules. He was joined in this work by two individuals who were to play essential roles in his laboratory until he retired and who themselves became distinguished investigators; Ruth Hubbard joined the laboratory as a graduate student and was eventually to become George’s second wife, and Paul Brown became Wald’s research assistant and long-time co-worker.

Lunch in the Wald Laboratory was an event. We took turns buying bread, deli meats, cheese, cookies, and drinks. At 12:30 p.m. we gathered in the lunchroom to be joined by John Edsall, Alex Forbes, Don Griffin, and occasionally Jim Watson, as well as their colleagues and students. George presided and we discussed science, politics, or whatever, and all joined in, from undergraduates like myself to professors emeriti such as Alex Forbes. The discussions were entertaining, provocative, and invariably stimulating.

George was one of Harvard’s best teachers. In 1960 he began his famous course entitled “The Nature of Living Things,” which he taught until his retirement. He started the course with his marvelous “Origin of Life” lecture and the second semester with an “Origin of Death” lecture.

The Vietnam War had a profound effect on Wald and was to lead him away from science. He was one of the signers of an open letter to The New York Times protesting the war in 1965. He won the Nobel Prize in 1967, and that provided him the recognition to speak out effectively on political issues. In 1969 he participated in a teach-in at the Massachusetts Institute of Technology and gave a speech called “A Generation in Search of a Future” that was published in the Boston Globe, The New Yorker and numerous other newspapers and publications. It eventually was translated into over 40 languages and was even released as a phonograph album.

The opening lines of his Nobel Prize lecture typify his approach to science: “I have often had cause to feel that my hands are cleverer than my head. That is a crude way of characterizing the dialectics of experimentation. When it is going well, it is like a quiet conversation with Nature. One asks a question and gets an answer, then one asks the next question and gets the next answer. An experiment is a device to make Nature speak intelligibly. After that, one only has to listen.”

Click here for supplemental reading about George Wald on Amazon.