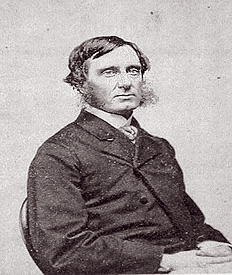 Courtesy of the Special Collections Library of the Pennsylvania State University.

George was the son of a United States senator and Chief Justice of Rhode Island, whose mother died when he was two years old. He and his brother were part of the Brook Farm community and school before he lived in Concord and became acquainted with Emerson, Fuller, and Hawthorne.

On becoming a writer and editor, he wrote the first “Easy Chair” columns for Harper’s New Monthly. He declined the invitation to be editor of the New York Times, but served as chancellor of the University of the State of New York. He spoke on critical issues of the day and authored forty books and pamphlets.