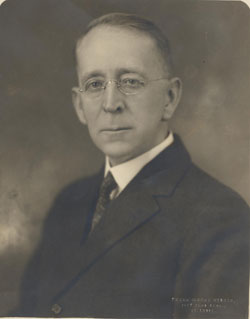 He could be learned without being dull. He could be a profound philosopher without being pedantic. He combined reason and reverence. In him deep religious feeling was joined to sound common sense.

George Rowland Dodson was humbly born at Jacksonville, Missouri, August 20, 1861. From earliest youth he was eager for knowledge and read everything he could lay hands on. By hard work he earned his way through the University of Missouri and graduated there in 1887. Already he had determined to become a minister, and before he graduated he was ordained minister of the Disciples Church in Mexico, Missouri, August 29, 1886. He served Disciples Churches in Santa Clara, California, and Fulton, Missouri, for two years and during that time read himself out of his inherited church allegiance. Apparently he had no contact during that time with liberal churches or ministers. His progress was under his own initiative and was shared by his alert and devoted wife. In 1891 he became minister of the Unitarian Church in Alameda, California, and remained there for ten years. He then sought further education and enrolled at the Harvard Divinity School, taking his master’s degree in 1902 and his doctor’s degree in 1903. In the latter year he became minister of the Church of the Unity in St. Louis, Missouri, and had there a fruitful ministry of thirty-four years. He died at St. Louis, November 13, 1939.

During most of this pastorate Dr. Dodson was also professor of philosophy at Washington University. Plato was his first master, and later he was a disciple of the French philosopher Bergson and his interpreter to American readers. For him philosophy was an adventure, and the chance to interpret life in the light of modern scientific knowledge gave him unfailing delight. He was a preacher to thoughtful people and many leaders of the intellectual and civic life of St. Louis were included in his congregation. He wrote innumerable articles and book reviews and two excellent books: one, Bergson and the Modern Spirit, summarizes his philosophical teaching; the other, The Sympathy of Religions, condenses his studies in comparative religion. He was active too in civic affairs and, among other interests, was the founder and president of the Missouri Association for Social Hygiene. His conduct of worship had a friendly informality and he had a rare gift of inspiring clear thinking and resolute action. His was a ministry characterized by intellectual virility, lucidity of statement, and emphasis on the spiritual values. He had for himself, and largely by himself, discovered a satisfactory system of rational theology, optimistic and constructive, and he visibly rejoiced in every opportunity of communicating his thoughts and his ideals to others. He sought to convict men of goodness rather than of sin and to make explicit and dominant the good that lies latent in every life. People were won to him not only as an intellectual guide but by his genius for friendship. He had a modest, self-effacing personality, but it was easy to catch the contagion of his glowing spirit. He lived beloved and died lamented.