George Putnam was born at Sterling, Massachusetts, August 16, 1807. His father, Andrew Putnam, was a substantial farmer. His mother, Jerusha Clapp, was of the Dorchester family of that name.

In 1809 his father died, leaving his mother with six children, of whom he was the youngest, being less than two years old. Accident and disease carried off three of his brothers and his only sister while he was still a boy, and he was familiar from his earliest years with sorrow and care, as well as with the noblest patience and courage. Perhaps the hard experiences of these days led one of his contemporaries in the pulpit to say of him:

Vivid enjoyment was not his use. Exultation was utterly foreign to his nature. Gayety, as we recall him, refuses absolutely to associate itself with his idea. The abandonment of a hearty laugh, eyes dancing with merriment, is what no friend of his manhood, we guess, ever witnessed in him. Not that he was discontented or morbid or morose, but grave to the verge of sadness. 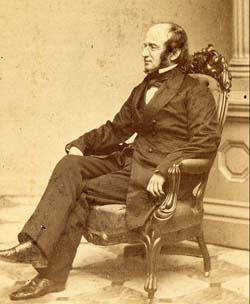 His love and his reverence for his mother, to whom he attributed all his opportunities for a successful career, were among the strongest and deepest feelings of his nature, and inspired many an eloquent and touching passage in his preaching throughout his life. She was determined he should have a college education, and made without flinching the sacrifices that many a mother before and since has made to that end. It was the not unfamiliar story, that, when goodness is plainly manifest in the busy marts of trade, in the halls of learning, in the councils of the nation, in the deepest searchings for the spiritual realities which give courage, insight, faith, success, and victory, we go back and back until we find its source in some sweet home of piety, nestling among the New England hills. George Putnam was sent to Leicester and Groton Academies, and in 1822 entered the Freshman Class at Harvard, graduating in due course and with high standing in 1826. His remarkable gift of fresh eloquence, joined to intellectual abilities of a high order, attracted attention even during his college career. His intention after graduating was to return to his paternal farm, and help his mother to carry it on. He decided, however, to spend a year in teaching, and soon after graduating became master of the Duxbury Academy. While at Duxbury, he was urged by the Rev. Benjamin Kent, the local minister, and by Henry Ware, Sr., then professor in the Divinity School at Cambridge, to enter the ministry, and went to the Divinity School in 1827. The Clapps were devoted to their orthodox Congregational faith, and in this faith he had been brought up. His aunts and his mother were of that faith, and there was sore distress when he became a Unitarian. But they all loved him too well to admit of any estrangement when he departed from their views.

Graduating from the Divinity School in 1830, he had already for several months been settled over the First Church at Roxbury, where he remained until his death. He preached for the first time in this church, April 11, 1830, and died April 1878. He married in 1831 Elizabeth Ann Ware, daughter of the Rev. Henry Ware, Sr.

He almost immediately took a high rank among the preachers of the day, but devoted himself as earnestly to the cares of his parish as to the preparation of the weekly discourse. But, if his calls were faithfully performed, they were not long or professional. Rev. Nathaniel Hall, of Dorchester, says that one time Dr. Putnam said to him, “Hall, how long do you stay when you make a parish call?” Mr. Hall replied in his quiet, gentle way: “Oh, it depends upon the nature of the conversation we fall into. If it prove very interesting or helpful or religious, thirty or forty minutes or a little longer.” “Why, Hall, replied Dr. Putnam, “I should think you would bore them to death. I never stay more than five minutes.”

Several attempts were made to induce him to leave the then comparatively obscure suburb for New York or Boston, and he was strongly urged in 1845 to go to Cambridge as Hollis Professor of Divinity and college preacher. But he preferred to keep on in the place and in the lines of work upon which he began. The country village that Roxbury in 1830 was, one may gather from the notice of the services of ordination. They occupied a whole day. There was a procession with a band of music, an array of marshals and ushers, and a dinner or banquet at the close. A numerous council was organized of ministers and lay delegates from churches far and near. The council examined the testimonials of the candidate, and passed judgment on his fitness.

In 1852, when Dr. Walker was made president of Harvard College, Dr. Putnam was chosen Fellow of the Corporation in his place, and served the college in that capacity till shortly before his death. In 1853 he was a member of the convention to revise the State constitution. During the war he broke the habit of his life to take no part in public affairs, except to preach an occasional political sermon on Fast or Thanksgiving Days, and was active in public meetings in his own neighborhood to aid and encourage the government. He was one of the few who never faltered in his confidence in Abraham Lincoln. Very early in the struggle he formed the highest estimate of his character and abilities, and never swerved from it through all the doubts and anxieties of those terrible years, when it often seemed to the most patriotic and sanguine that the government was hopelessly weak and wrongheaded. In 1864 he was one of the presidential electors at large, and in 1869 and 1870 he represented his fellow-citizens in the State legislature, where he acquired great influence and respect.

In 1872, while still apparently in the full vigor of his powers, and while his reputation and popularity as a preacher were undiminished, he was suddenly struck with paralysis; and, although his mind was never affected, and after a time he partially recovered his strength, he was never able to fully resume his work, and died in 1878 in his seventy-first year.

In 1904 there was placed in the church, by the pulpit where his distinguished ministry began and ended, a beautiful tablet, given by his sons, with a bust of him by Greenough, and bearing this inscription: