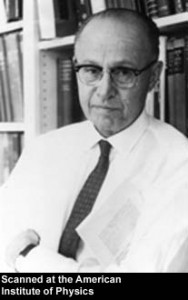 George Bogdan Kistiakowsky was born in Kiev, Ukraine, on November 18, 1900. One of the few scientists at Los Alamos who had experienced combat, he attended private schools in Kiev and Moscow until the Russian Revolution broke out in 1917. He fought in the infantry and the tank corps of the White Russian army, was imprisoned by the Bolsheviks, and later fled to Germany. He completed his Ph.D. at the University of Berlin in 1925, and then came to the U.S. in 1926. He first taught at Princeton University before coming to Harvard in 1930. He became professor of chemistry at Harvard in 1938, chairing the department from 1947 to 1950.

Kistiakowsky joined the Manhattan Project in late January 1944 as head of the implosion department. Under his leadership came the complex explosive lenses needed to compress the plutonium sphere uniformly to achieve critical mass.

After World War II, Kistiakowsky returned to Harvard and divided his time between teaching and advising several U.S. administrations on arms control and foreign policy. He served on the President’s Science Advisory Committee between 1957 and 1964, and as the Special Assistant to the President for Science and Technology from 1959 to 1961. He was also a member of the U.S. delegation to Geneva in 1958, where the U.S. and USSR discussed ways to reduce the danger of surprise nuclear attack.

Kistiakowsky severed his connections with the Pentagon in 1968 in protest against U.S. involvement in Vietnam. He shifted his efforts and became involved in electoral campaigns and advocacy groups. After his retirement in 1971, he became even more involved in political activism. He died on December 7, 1982.

Click here for supplemental reading about George Kistiakowsky on Amazon.