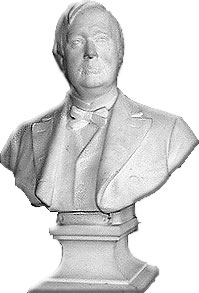 Bust of Senator Hoar in the Massachusetts State House.

Born in Concord, Massachusetts, George practiced law in Worcester, Massachusetts, and served in the House of Representatives, there actively advocating public education as a national agent of social transformation. After being elected to the U.S. Senate, he served for twenty years on the Senate Judiciary Committee and claimed authorship of the Sherman Antitrust Act of 1890.

An anti-imperialist, he was almost alone in seeking self-determination for both Filipinos and Puerto Ricans.

George Hoar twice declined a seat on the Supreme Court of the United States.

He died in Worcester, where he was a prominent Unitarian.