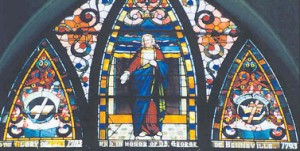 An early preacher of Universalism, de Benneville represents a mystical, experiential type of the faith. He was born in London to French parents on July 26, 1703. His father, George Sr. was of noble birth, but he had been exiled from France due to Huguenot sympathies. George was the youngest of nine, and his mother died in childbirth. The young boy received a noble upbringing when his Godmother Queen Anne brought him into the royal family. After a fine education, he tried a brief stint in the Royal Navy.

After being influenced by Prince’ George’s chaplain, de Benneville underwent a conversion that God’s universal love and grace meant that all souls were to be restored. He then returned to France to preach, and though he was arrested and warned, he returned a second time to do more preaching. Arrested a second time, he was condemned to die. Although his companion was executed de Benneville received a reprieve from Louis XV due to his noble background. He then went to Germany and Holland where he found many sympathetic listeners, among them a variety of pietists and mystics. Especially important were the Waldensians, who believed that Christ’s sacrifice relieved all people of original sin. He also studied medicine, and eventually was able to be a practicing doctor for about eighteen years.

Around 1740 de Benneville became very ill with what he called a “consumptive disorder.” This led to a very high fever, which was so severe de Benneville had a vision that he had died, and was drawn up into a cloud. He had two companions, one of whom told him that all creatures would be restored to happiness without exception. His extensive description of the experience was later published in The Life and Trance of George de Benneville. Finally he was reunited with his body in a coffin, because his friends thought he was dead. They discovered that he was very much alive when he sat up to speak, and the flabbergasted mourners helped him out of the coffin. This vision helped lead de Benneville to believe that he was called to preach in America, and he went there in 1741.

He settled first in Germantown, where he assisted Christopher Sower, who was a Dunker and a universalist, with printing. Eventually they produced a German edition Bible in 1743, and Paul Siegvolck’s The Everlasting Gospel in 1753, which later proved instrumental in Elhanan Winchester’s conversion. Winchester helped make de Benneville better known by seeing that the Life and Trance was published in 1800. In the meantime de Benneville continued to meet a variety of other religious groups. He was attracted to a group of followers of Casper Schwenkfelder, and he also frequently visited the monastic community at Ephrata.

De Benneville purchased some land in the country northwest of Philadelphia, and went there with his new bride Esther Bertolet, who emigrated from Germany. From here he frequently went on itinerant preaching tours, which took him as far afield as Virginia and Maryland. He also taught among the Native Americans. The couple moved back to Philadelphia in 1757 with their five children. de Benneville was able to take advantage of the intellectual life there, and continued to work as a doctor, including offering medical care to the wounded at the battle of Germantown. He died in March 1793. Though he was not a settled minister or the founder of churches, de Benneville is often called the first preacher of Universalism in America, and he was an important early influence on its development.