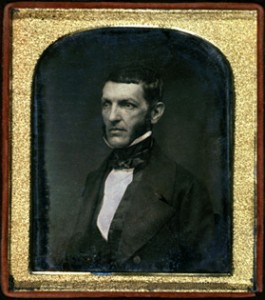 Bancroft’s father, a minister in Worcester, Massachusetts, served as president of the American Unitarian Association.

George was a student in Göttingen, Germany, where he earned a doctorate in 1820. While in Europe, his exposure to current thinkers was rich. He heard Hegel and Schleiermacher speak in Berlin and personally met Göethe and Lafayette.

After trying a ministerial career, which he concluded would lead him nowhere, he briefly taught Greek at Harvard before initiating a pathbreaking progressive education at Round Hill School in Northhampton, Massachusetts. Bancroft was dissatisfied with this achievement, and he soon moved on.

After marrying Sarah Dwight in 1827, he began writing his multivolume History of the United States, a text which continued to sell well as the number of volumes grew.

He decided to enter politics. Although sustaining losses in local elections, he was propelled into national politics as secretary of the Navy. Bancroft established the Naval Academy in Annapolis, gave the orders which led to the occupation of California, and pleaded for the annexation of Texas.

His career as an American diplomat involved his being ambassador to Great Britain and then serving as the U.S. minister to Prussia. He served in Berlin for seven years before he died in 1891.