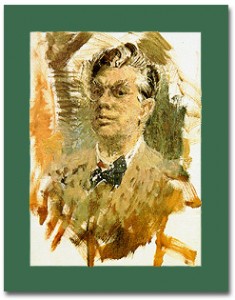 In “The Painter of Modern Life” Baudelaire describes the artist as a passionate spectator “amid the ebb and flow of movement, in the midst of the fugitive and the infinite.” A near-contemporary, the critic Edmond Duranty speaking of Degas, concurred: “By means of a back we want a temperament, an age, a social condition to be revealed; through a pair of hands, we should be able to express a magistrate or a tradesman; by a gesture, a whole series of feelings . . .” Gardner Cox called this preliminary act of sustained observation his “fly on the wall” technique; his initial step in creating a portrait was to study the subject interacting with the environment. “Pay no attention to me—I don’t exist,” he would say, making rapid sketches. As a portraitist he regarded the mysteries of identity amid the fugitive flux of time, but he would not have been so distinctive an artist if he did not also have a visionary sense of the fantastic and the infinite.

Unquestionably his best-known work was in portraiture. He did more than 300 portraits, from General George C. Marshall and Supreme Court justices to tender domestic images. The genre established his reputation and in it he gave his own answer to the question “Why paint portraits during an age of photography?” The obvious reason lies in the monocular vision of the camera; unless the moment is propitious, it cannot see with the complexity of the human eye. Behind the latter and interacting with it looms the intelligence and sensibility of the painter. The portraits of Gardner Cox are not validations of power, they are too serious for flattery, they do not serve as mere decor or as routine commissions from banks, universities and wealthy individuals, and though he was a realist with an obligation to likeness, the portraits allude and suggest rather than submit to the exigencies of practical representation.

The tension between getting a good likeness and making a good picture accounts for the haunting quality of many of his pictures‚Äîthe Felix Frankfurter at Harvard Law School, where a few loosely-brushed strokes constitute a background for the head like the visible emanation of mental activity; the Dylan Thomas, painted in a burst of enthusiasm after hearing the poet deliver the first reading of “Under Milk Wood” at the Fogg Museum, yet capturing his tragic vulnerability; the profile portrait of Robert Kennedy which, like the Dylan Thomas, sounds an eerily prophetic dark note (now in the National Portrait Gallery, the picture antedated Kennedy’s assassination by a few weeks) where the subject is isolated, almost engulfed by space.

Each portrait by Gardner Cox constituted a complex skein of relationships between painter, sitter and spectator. Growing up in a world where John Singer Sargent dominated portraiture, Cox had obviously looked long and hard at Sargent, but the portraiture of the young New Englander was to have nothing about it of Sargent’s paste-jewel society panache, with sitters inhabiting Reynolds arid Gainsborough settings; it was more in accord with the introspective spirit of art’s mid-century. The subjects of Gardner Cox are usually placed in abstract spaces and define themselves through a gesture or a formal interplay of color relationships. They express what they are rather than who they are; the social accessories are kept minimal; the inner self is reciprocal with the outer likeness.

The difference between a Gardner Cox portrait and one that only documents is the difference between poetry and prose. Not every artist, however fluent, can paint a portrait. Patently the task requires empathy with people, a psychological instinct and a compelling touch of curiosity But giving visual life to someone else also requires an imagination which affords the appropriate image. Gardner Cox’s portraits may seem remote from the forms and textures of his visionary personal statements; one is objective realism, the other an alternate universe of shadowy images, slight distortions and near-surrealist juxtapositions. In fact, the inward fantasy of this universe overlaps the other. The face is a mystical landscape no lessthan the stellar panoramas of the invented compositions. 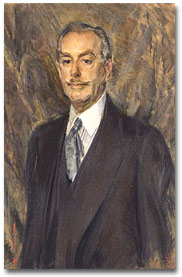 From the start of his career achieving universality was a major objective. That career commenced formally rather late when, in 1936, the 30-year-old Gardner, who had been designing houses, stores, even a nightclub, left his father’s architectural firm in order to devote himself to art full-time. But painting had long been a passion; Gardner’s mother was a gifted artist who had studied in Paris, and even in the Depression he found an audience. People liked his work, he could make a living. “In those days I did landscapes,” Gardner remembered, “And after World War II, I painted oils of cobwebs in the dewy morning grass.” On a painting trip with friends, an annual Columbus Day event, he usually painted a single leaf, the papery veinings meticulously rendered, just as every spring it was a ritual for him to paint a single crocus.

The direct nature studies bear an oblique relationship to the fantasies. He began the latter with elemental arrangements, designs he called his “basics,” because the painting employed a vocabulary of basic contrasts, line and cylinder, solid and void. The basics, however, evolved into the visionary constructions with their shifts of scale and images of eggs, crumpled paper and stone. They were neither naturalistic or out of this world, and could not be measured in man-made terms. “Eggs have a delicacy, a smoothness, are monumental, and instinct with life,” he said. They were moons, space vehicles, birds’ nests, seashells, planets. They were the pristine oval of the face awaiting the magical detailing of the artist. They were anticipations of voyages through the cosmos, but the journey not the arrival mattered and transformation gave the shapes infinite possibility. The landscapes often extend to a far horizon above which great plants flower, majestically floating. Sometimes the terrain features vast rocks on a scale of unknown immensity A surrealist painter contemporaneous with Gardner Cox would tend to make the vision hallucinatory, dreamlike and feverish; but, characteristically, Gardner open-endedly allows the spectator to complete the meaning of these elusive sites, carrying the picture only to the point where his viewer’s imagination is stirred. 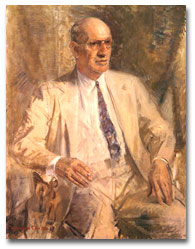 Lessing J. Rosenwald, Director of Sears, Roebuck & Company and founding benefactor of the National Gallery of Art, by Gardner Cox, 1955

And here is another connection between the portraiture and the fantasies. The range of Gardner’s portraits, from Robert Frost to Elizabeth Bancroft Schlesinger, from the granddaughter of Owen Wister to Dean Acheson and Gov. Michael Dukakis, suggests the trust in which his sitters placed him. The same concern for someone else’s sensibility apparent in the celestial fantasies translates into the quiet conviction of the portraits. With his John L. Lewis eyebrows, jaunty bowties, houndstooth sports jacket with a crimson bandanna stuffed casually in the breast pocket, Gardner himself was a character as vivid as anyone he painted. He had the dash of Whistler without Whistler’s deplorable temperament. Gardner deserved the trust of his sitters; he did not project his ego but his respect for truth and the high estate of art. Although someone dubbed him “the court painter of Harvard University,” he was no more a court painter than Goya—as his sturdy response to Henry Kissinger’s rebuff indicates. Invited to “improve” the image rejected by Kissinger, Gardner declined because “I didn’t see anything I wanted to change.” What could a Secretary of State tell him about portraiture? In his Harvard Alumni report, Gardner wrote, “Principal Works: Many portraits and other paintings in collections of: the National Gallery of Art, National Portrait Gallery, Boston Museum of Fine Arts; government departments: State {three secretaries), Labor, Defense, Air, Army, U.S. Supreme Court (seven justices); universities and colleges: Harvard, Yale, Princeton, Chicago; many in private collections. Occupation: Artist.”

The Artist Explains His Approach
by Gardner Cox

In painting a portrait, my aim is to depict in one image a convincing evocation of the appearance and character of the subject—what he or she looks like and feels like to me. Of the two aspects, the second is much the more elusive and difficult, but it is the sine qua non, and the work would be lifeless without it.

My first step is to familiarize myself with the subject, and I propose the “fly on the wall” approach. This consists of making notes and sketches of the subject going about his or her normal business in familiar surroundings—chambers, office, laboratory, lecture room, home—conferring, telephoning, reading, thinking, moving about—under pressure, in cheerful moments or irritating ones.

During this approach the subject must ignore the painter—no polite conversation, no trivial courtesy. (Perhaps an occasional request that the painter leave if a conversation becomes confidential.) Sketching and investigative note-taking go on for a series of sessions until the painter feels he has enough data. It is painless for the subject, wastes none of his time, for he had done virtually no posing at all, and it has supplied a wealth of material to the painter: informing, stimulating and involving him. By this time the pose, the main characteristics of the sitter he intends to suggest, along with the general color tones, and the size of the picture have become settled in the painter’s mind, and it is time to proceed to the studio to paint the actual portrait.

In the studio the subject becomes the “sitter” and takes a previously selected pose. The importance of the pose cannot be overemphasized. The body carries many messages and its shape and bearing identify the person even from the back a block away. It is an important factor, along with expression on the face, in evoking appearance and character: whether the sitter is aggressive or passive, large and portentious, small and feisty, frail or robust, etc. To quote Montaigne: “each particle of a man reveals him” and the body is the largest particle in the picture, it is the element that establishes the portrait’s character as seen even from a distance.

But it is, of course, through the face that the personality can be both most emphatically and most subtly suggested. Specifically, the expressions that animate the face, as caught by the painter, make the portrait.

Here the painter has an advantage over the photographer, who must accept what the camera sees—the sitter’s expression of that instant only, while the artist can edit what he sees and express more penetratingly his feeling about the sitter. He can indicate at least two expressions and sometimes even more, selected as suggesting special characteristics. For example, the right side of the face may be depicted as serious and stern: an eye slightly narrowed, the corner of the mouth drawn slightly down. The left side, on the other hand, may suggest warmth and/or humor: a slightly smile-crinkled. eye and a slightly upturned corner of the mouth. This apparently contradictory sternness versus warmth (a not unusual combination) is in no way confusing to the viewer, whose gaze automatically shifts back and forth very rapidly since it is not humanly possible to focus on more than one small area of the face at a time. Thus the viewer receives in rapid succession a number of impressions which the painter has provided and this variety animates the portrait.

When the painting is pictorially satisfying and looks and feels to me like the subject, I have done.

Gardner Cox was a member of the First Parish in Cambridge, The First Church in Cambridge (Unitarian Universalist).

Based on the desire for perfection.
Recording existing but passing charm.
It will last with the race.
It will always be in—as long as humans are human.

Portraits are challenging, force you to work.
(Interesting people). Bring all aspects or factors into play:

Draw Back. Temptatiopn to please (which is
almost always fatal. Hope to (can only please
yourself) & succeed. You do not know what
another thinks of himself—or what a wife thinks of a husband and so on.

Make it feel as they make you feel—that’s the best you will ever do!