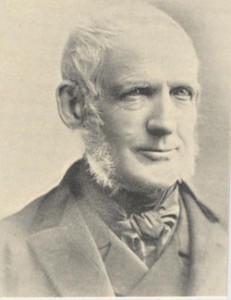 The subject of this sketch deserves an honorable place in the annals of the Unitarian ministry for his devotedness and enterprise in the cause of theological education and scholarship.

Never the pastor of a church, and preaching only at intervals, he took a prominent part in the education of a generation of Unitarian ministers, and embodied in his several books the results of a vast amount of original investigation and minute and accurate research.

Frederic Huidekoper was born on April 7, 1817, the youngest son of Harm Jan Huidekoper, who came from Holland and settled in Meadville, Pennsylvania, early in the (last) century, as the agent of the Holland Land Company. The father was a man of character and position, possessed of much intelligence and a strong religious nature. He worked out for himself a positive Unitarian faith; and, when his sons grew to need better instruction than was furnished in the frontier village, Mr. Huidekoper sent to Harvard University for tutors. Some of the young men thus brought out to Meadville were students of the Divinity School.

In this way Unitarian preaching began in Meadville, and it resulted after a while in the organization of a church. Frederic Huidekoper studied for a time at Harvard, and for a longer period in Germany, attending, among other lectures, those of Neander and De Wette. A partial failure of eyesight led him to give up the purpose of taking a parish. He was ordained as an evangelist at Meadville, October 12, 1843, and became actively interested in theological studies and denominational mission work.

In 1844 he started a project to gather a few young men for ministerial studies and training. The plan fell in with the wishes of many Unitarian ministers East and West. Dr. Hosmer, of Buffalo, warmly cooperated with Mr. Huidekoper, as did for a time several neighboring ministers of the Christian Connection. A small grant was furnished by the American Unitarian Association, and Rev. (afterward Dr.) Rufus P. Stebbins, of Leominster, Massachusetts, was called to preside over the new organization. The father of Mr. Huidekoper bought a small, unused church, and fitted it up for classrooms, and the school was started with ten students in the fall of the same year, Frederic Huidekoper taking the departments of Church History and New Testament Literature.

For nearly thirty years he gave his services freely to the school, although after a few years he restricted his work to the early period of Christian history. Within this sphere he was a lifelong and independent investigator, gathering a very complete library of the literature of the period, and publishing three painstaking and highly original books which attracted notice among scholars on both sides of the Atlantic.

Professor Huidekoper knew the literature and events of the first three centuries with an accuracy and fullness that was, as one of his German reviewers said, “astounding”; and it sometimes seemed to his pupils that the personages of these centuries were quite as familiar to him as the men and women of his own time. His brother-in-law, James Freeman Clarke, said of this minute and familiar acquaintance with them that “Brother Fred knew the first three centuries all to pieces.” Probably he was more distinguished by precision in details and dislike of slovenly study or suppression of facts than for correct historical proportion or breadth of historical view. At the same time he was in advance of his age in many points of Biblical criticism; and, though he came to be reckoned among conservatives, he was for a time the most radical member of the Meadville Faculty. Probably he was the first theological professor in the country to teach distinctly the composite nature of the Pentateuch, though Andrews Norton’s note on the Old Testament approached the same freedom of treatment. In his later years he became entirely blind; and doubtless the failure of sight prevented that broadening of the range of his studies which might have given better literary form to his writings and a clearer historic perspective.

Professor Huidekoper was a scholar of the type of Andrews Norton and Ezra Abbot, and a Unitarian after the style of Henry Ware and Dr. Gannett. He was warmly devout and cheerfully trustful, and he bore with fortitude and patience the long-darkening and finally total loss of sight. He was most amiable and hospitable in his home, and scrupulously just and actively benevolent in business and social relations. Possessed of ample means, he held himself to be a steward for the interests of liberal Christianity and the well-being of the community in which he lived. He did much to improve and beautify Meadville and to further its humane and charitable interests.

Professor Huidekoper was married in New York on November 10, 1853, to Harriet Thorp, and they had four children. He died at Meadville, in the house in which he had been born, on May 16, 1892.