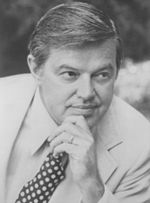 Frank Forrester Church was a Senator from Idaho from 1957 to 1981. He was born in Boise, Idaho on July 25, 1924, and attended public schools. Church graduated from Stanford University in 1947 and from Stanford Law School in 1950. During the Second World War, he served in the United States Army and was assigned to Military Intelligence in India, Burma, and China 1942-1946. Church was admitted to the bar in 1950 and commenced the practice of law in Boise, Idaho. He was elected as a Democrat to the United States Senate in 1956, reelected in 1962, 1968, and again in 1974, and served from January 3, 1957, to January 3, 1981. Church was chairman of the Special Committee on Aging (Ninety-second through Ninety-fifth Congresses), Special Committee on Termination of the National Emergency (Ninety-second through Ninety-fourth Congresses), Select Committee on Government Intelligence Activities (Ninety-fourth Congress), Committee on Foreign Relations (Ninety-sixth Congress) and United States delegate to the twenty-first General Assembly of United Nation. Afterwards, Church resumed the practice of law and was a resident of Bethesda, Maryland, until is death there on April 7, 1984.

—From the Biographical Directory of the United States Congress

Father and Son: A Personal Biography of Senator Frank Church of Idaho, by F. Forrester Church (1985).