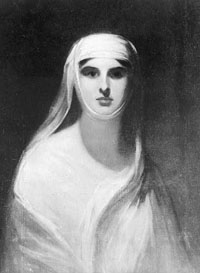 Photograph from a painting by Thomas Sully. Courtesy of the Library of Congress (LC-USZ62-112016).

Born in London as a member of a notable acting family, Fanny was able to prevent the family’s financial ruin by studying acting for three weeks and making a sensational debut as Juliet in Romeo and Juliet. In 1832 she toured the United States and Canada, where she was praised as the first great actress on the North American stage.

After being courted by Pierce Butler, a Philadelphia gentleman from a slave-owning family with a Georgia plantation, she married him. The union bolstered her family’s financial prospects, but conflicts were soon evident. Fanny Kemble had been influenced by Unitarian minister William Ellery Channing to seek the abolition of slavery. When she insisted on visiting the Georgia rice and cotton plantation, she was so horrified by what she saw that she wrote a journal of her experience, which her husband demanded that she not publish it because it was an act in disobedience to his will. 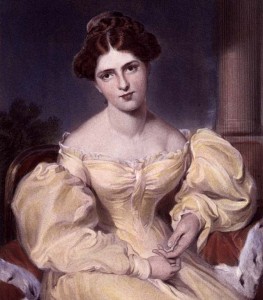 Distraught and seeking to recuperate, she left her husband and their two children and traveled to the Continent. He began divorce proceedings. She began public dramatic readings with great success. When she agreed not to testify about his unfaithfulness, she was granted two summer months each year with the children and $1,500 per year in alimony.

Pierce Butler squandered his inheritance through gambling and stock speculation. In 1861 he was arrested for treason and then released. His former slaves became his share-croppers. After contracting malaria, he died in 1867.

Fanny Kemble died in London in 1893 after continuing her career of dramatic readings and publishing many writings, including her Journal of a Residence on a Georgia Plantation.