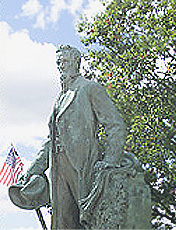 The entrepreneur who founded Cornell University was the son of Quaker parents in the Bronx. His father, who had been a potter and a school teacher, purchased a farm in upstate New York, Ezra became a journeyman carpenter and then a foreman of a grain and wall plaster mill. When Ezra married an Episcopalian, Mary Ann Wood, he was excommunicated by the Quaker meeting.

Ezra’s farm was a model for others. He invented and patented a special farm plow. When Samuel F. B. Morse invented the telegraph and sought to transmit between Washington DC and Baltimore, Ezra Cornell devised a way the first message could be communicated in 1844: “What hath God wrought?” He then supervised building a line between Albany and New York City. His stock price arose dramatically, making him wealthy.

Ezra Cornell served a term in the New York state legislature. He donated $100,000 toward creating a free public library in Ithaca. He proposed that New York act under the Morrill Act to provide instruction in agriculture and mechanic arts in Ithaca, with Andrew D. White serving as the first president of Cornell. He provided an endowment of $500,000. Admission was open to rich and poor, without any religious restrictions, and beginning as early as 1872 open to both male and female students.