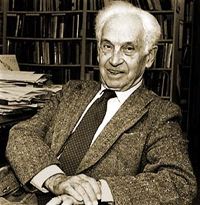 Born in 1904 in Germany, Mayr trained as a medical student but realized he had a greater passion for studying birds and biology. Emigrating to the United States, he became a curator at the American Museum of Natural History, working on bird classification while formulating his key ideas about evolution. In 1942 he published his most important work, Systematics and the Origin of Species. Mayr moved to Harvard University in 1953 and served as director of the school’s Museum of Comparative Zoology from 1961 to 1970. Since then, he has published a number of books and chapters and received the prestigious Japan Prize for Biology in 1983.

In his landmark 1942 book, Mayr proposed that Darwin’s theory of natural selection could explain all of evolution, including why genes evolve at the molecular level. On the stubborn question of how species originate, Mayr proposed that when a population of organisms becomes separated from the main group by time or geography, they eventually evolve different traits and can no longer interbreed.

This Is Biology: The Science of the Living World by Ernst Mayr