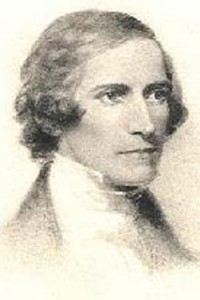 Ephraim Peabody was born in Wilton, New Hampshire, March 22, 1807. His father, Ephraim Peabody, was the village blacksmith. His mother was Ruth Abbot, a member of a family which has sent out from Southern New Hampshire many able and public-spirited men and women. The blacksmith father died young, and the widow brought up her two children, a son and daughter, after the wholesome fashion of a New England country household. The son enjoyed the privileges of early education which are the birthright of every New England boy, and, in addition, had the benefits of active country life and manual labor on the farm. He had a year of study at Byfield Academy, and then went to Phillips Academy, Exeter, which was under the charge of his uncle, Benjamin Abbot. From Exeter he went to Bowdoin College, where he graduated in the class of 1827. At school and college he won the high regard of his teachers and classmates, and showed the intellectual force, the habits of diligence and observation, and the poetic gifts which afterwards distinguished him. He was a very tall, slender youth, of gentle and refined appearance. It was natural that on leaving college he should go at once to Cambridge to prepare himself for the ministry. All his aptitudes and inheritances led him in that direction. The Abbot blood had been for generations productive of ministers. Wilton, his native place, was one of the few New Hampshire towns wherein the church had adopted liberal Christian principles, and Ephraim Peabody was trained, alike in his family and in his church connections, in the principles of a pure Christianity.

Mr. Peabody graduated at the Harvard Divinity School in 1830, and went at once to be a tutor in the family of Mr. Harm Jan Huidekoper at Meadville, Pennsylvania—a post which was filled by a succession of young clergymen, almost all of whom afterwards attained to high distinction. At Meadville he began to preach, and his services were highly appreciated. With characteristic modesty he declined a number of calls which were offered to him, but for which he did not think himself sufficiently prepared. Finally, in 1832, he accepted an invitation to serve the little Unitarian congregation recently gathered in Cincinnati, which was then an outpost. His congregation was small, his salary modest, his labors and his successes great. His amiability and sweetness of nature made controversy with him on the part of hostile ministers or sectaries impossible, and the Unitarian church not only increased steadily in numbers and influence, but also in public respect. Mr. Peabody’s poetic gifts declared themselves alike in his contributions to the magazines of the time and in the illustrations which he used in his preaching. In spite of wearing professional labors and the impossibility of procuring exchanges, Mr. Peabody found time to direct the literary activities of many young people, and also to superintend and edit a liberal religious magazine. He labored, however, with such assiduity as to sow the seeds of the ill-health which too soon beset him. In 1833 he married Mary Jane Derby, of Salem—a union productive of all the happiness which can follow from affection, sympathy, and common griefs and joys. In the summer of 1835 he traveled to Boston with his wife and child to deliver the poem before the Phi Beta Kappa Society at Harvard, but just before the meeting of the society he had a hemorrhage from the lungs, and all speaking in public had to be abandoned. His intimate friend, George Putnam, read the poem which he had prepared. The summer of 1835 was also saddened for him by the death of his first-born son, and thus bereavement and sickness were combined to distress his spirit. Though he returned to Cincinnati, he was unable to continue his work, and went in the winter to Mobile, Ala. There the charm of his character and preaching was speedily felt and appreciated, and, after resigning his charge at Cincinnati, he returned to Mobile for another winter’s preaching.

In the summer of 1837 Mr. Peabody occupied the pulpit of Federal Street Church in Boston, and then accepted a call to the First Congregational Society in New Bedford under a somewhat peculiar but remarkably successful arrangement. Two ministers, both of them in infirm health, Mr. Peabody and Rev. John H. Morison, took joint charge of the parish, and divided the labors between them. This arrangement could not have been made between men of ordinary quality. It was carried out faithfully and in the most kindly spirit for a number of years, the two ministers “in honor preferring one another.” Mr. Peabody went to New Bedford after two years of almost unrecompensed ill-health and in distress of mind and body. When he began his New Bedford ministry, the whole furniture of his study consisted of a little pine table and two chairs. His stay at New Bedford was also marked by the loss of two more young children, but in spite of these calamities he preserved his quiet self-possession and kindly cheerfulness. He endeared himself to the people of the place with a strength of affection which is very rare. They admired his wisdom, they loved his gentleness, they delighted in his constant and genial humor.

In 1845 he resigned his charge in New Bedford to accept the call to King’s Chapel in Boston, having at the same time to decline the call to another Boston church which had been equally attracted to him by the persuasiveness of his preaching, the strength of his character, and the beauty of his life. He soon established himself, not only in the hearts of the people of King’s Chapel, but in the respect and affection of a much larger community. He was assiduous in cultivating a personal knowledge of the character of each member of his congregation. Said a parishioner:

In one respect he was the most remarkable man it has been my fortune to meet, and that was in the union of a childlike simplicity with a singular knowledge of men. His judgments on the characters of those with whom he came in contact were wonderful. All shams, all pretence, all mere outside coverings, seemed to fall at once before his gentle eye; and though his opinions were announced with great caution, and he always took the most lenient view possible, yet it was clear he understood perfectly well the real character of those whom he knew. The affection which he inspired in the people of his parish has never been surpassed.

His work extended far beyond the bounds of any single church. As at Cincinnati he had edited a magazine, so in Boston he became one of the editors of the Christian Register, and, in cooperation with able associates, bestowed much time and labor upon that journal. In association with Frederic T. Gray he founded a school for adults whose education had been neglected, and laid down far-seeing plans for the development of the school system of Boston. He was exceedingly active and useful in the philanthropic work of the city. He was one of the founders of the Provident Institution for Savings, which has been the model for the savings-banks of the nation. He also, far in advance of his time, introduced at Boston the plan of associated charitable work. He divided the city into districts, and gave the supervision of each district to an individual who was responsible for the administration of poor relief in that section. He was further frequently called upon to represent the city or his denomination on public occasions as orator or poet. In 1852 he delivered the Commencement poem at Bowdoin College, which was received with great enthusiasm. In the succeeding year he passed six months in Europe, going with the vivacity of a boy, and enjoying with all the power of enjoyment of a highly cultivated man. A fellow-traveler wrote of him:

To visit these scenes with him, to listen to his criticisms, to be guided by his excellent taste, to be enlightened by his extensive knowledge, but, more than all, to be affected by nearness of a character so refined, so simple, so true, I regard as among the most fortunate events of my life.

In the summer of 1855 he was again attacked with bleeding at the lungs, and was soon compelled to give up preaching. His last appearance in public was to preach the memorial sermon for his friend, Judge Charles Jackson, on the last Sunday of 1855. The sermon is remarkable for its appropriateness, not only to the distinguished judge it commemorated, but, unconsciously, to the life of the preacher himself. He died in Boston on the 28th of November, 1856.

— By Samuel A. Eliot

The Biography of Francis Greenwood Peabody