Emily Taft Douglas of Illinois recognized the dangers of fascism during the mid-1930s and dedicated her public career to the cause of collective security against aggression and the establishment of a permanent machinery to insure international peace. The daughter of sculptor Laredo Taft, she was born in Chicago on April 10, 1899, and was graduated with a Ph. B. from the University of Chicago in 1919. Following study at the American Academy of Dramatic Art she worked in the theater and by 1926 was the star of The Cat and the Canary on Broadway.

In 1931 she married University of Chicago professor Paul H. Douglas, who at the age of fifty enlisted as a Marine private in 1942 and later was elected to three terms as Senator from Illinois. Disturbed by the rise of fascism in Europe and by the Italian invasion of Ethiopia, she returned from a trip abroad in 1935 to organize and chair the Illinois League of Women Voters’ department of government and foreign policy. In 1942 she became executive secretary of the International Relations Center in Chicago.

In February of 1944 Illinois Democrats chose Douglas as their nominee for the state’s at-large seat in the House of Representatives. In the general election, Douglas, who ran as a supporter of Roosevelt’s foreign polices, faced Republican Stephen A. Day, one of the staunchest isolationists in the House. Despite the formidable opposition of the Chicago Tribune and its powerful publisher, Colonel Robert McCormick, she defeated Day by over 191,000 votes.

Shortly after the opening of the Seventy-ninth Congress and in her first House vote, Douglas opposed the establishment of a standing Committee on Un-American Activities. She also helped rescue former Vice President Henry Wallace’s chances to become Secretary of Commerce by acceding to the demands of Wallace’s opponents and voting for legislation to withdraw the Reconstruction Finance Corporation’s lending bureau from the jurisdiction of the Commerce Department. 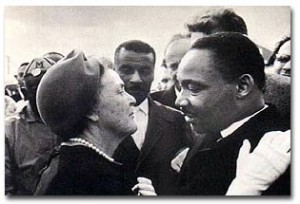 During her term in the Seventy-ninth Congress, Douglas served on the Committee on Foreign Affairs and was widely recognized as a specialist in the field. She joined several committee colleagues on a visit to Europe in August 1945 to inspect the work of the United Nations Relief and Rehabilitation Administration. Along with California Representative Jerry Voorhis, she proposed legislation to put the United Nations in charge of international programs for arms control and the abolition of atomic weaponry. She also called for greater federal support for libraries, particularly those in rural and low-income areas, and cosponsored a public library service demonstration bill.

Weary and frustrated by wartime controls and shortages and the strains of demobilization, voters in the midterm elections of 1946 ousted fifty-four House Democrats, among them Douglas who lost to William G. Stratton. Following her husband’s election to the Senate in 1948, she served on the legislative committee of the Unitarian Fellowship for Social Justice and as the Continental Moderator of the American Unitarian Association. Douglas also wrote a book for juveniles, a biography of Margaret Sanger and a book of biographical essays on famous American women. She was a resident of White Plains, New York, until her death on January 28, 1994.

—  From the Biographical Directory of the U.S. Congress 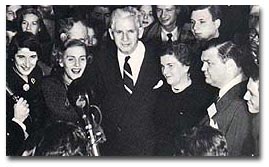 Among the trinity of American immortals, Unitarian Thomas Jefferson at last has been generally accepted. If April 13 is not officially celebrated, as are the birthdays of Washington and Lincoln, there nevertheless has been a growing reverence for the man who, more than any other, charted the course of our free institutions.

The delayed homage to Jefferson was perhaps inevitable. After all, the “father of our country” won his war for independence and the “great emancipator” won his war to preserve the union, but Jefferson’s battles were never-ending and permanently controversial. They dealt with civil rights and the freedom of the mind and spirit. His writings remain the “arsenal of great ideas of democracy’s most articulate champion.” Furthermore, his many-sided influence is hard to gauge, for he was the American embodiment of the enlightenment.
This movement, kindled by Newton and Locke, had unleashed not only a great zest for knowledge, but also something new under the sun, scientific evidence of an orderly universe. This meant that man was not merely a pawn of whimsical or malignant gods and demons. For the first time, people dared to believe in reason and its guidance to a better life. The human mind, emerging from ancient fears and superstitions, launched new experiments, many of which were fostered by Jefferson. But in a democracy where the intellect often is suspect, it is easier to honor the courage of Washington and the compassion of Lincoln than the mind of Jefferson. 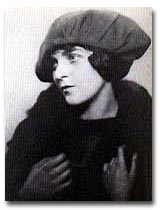 He wrote his own brief epitaph, and it is remarkable for what he omitted, as well as what he chose to have remembered. He did not mention that he had served two terms as president or served as vice-president, secretary of state, minister to France, governor of Virginia, or member of the House of Burgesses. He did not claim that almost single-handed he had carried Virginia forward from a feudal state to a modern one by ending primogeniture and entail, dissolving the union of state and church, and reforming the penal code. He did not boast of the Louisiana purchase which had more than doubled the nation’s territory, and secured “an empire for liberty.” Nor did he list the many practical and imaginative projects by which he had enriched his country. He merely wrote, “Thomas Jefferson, author of the Declaration of American Independence, of the Statute of Virginia for Religious Freedom and Father of the University of Virginia.”

The last of these embodied his faith in education. Never did he doubt that the people themselves were “the only safe depositaries” of power, but to render even them safe, their minds must be improved. Yet he had failed in his long crusade for universal education, and Virginia had rejected even his plan for free primary schools. Some day all states would accept those basic views which had outraged wealthy taxpayers, but at least in his last years he had realized the crowning feature of his plan, a state university.

The Statute for Religious Freedom contains phrases equal to those in the Declaration of Independence, but its significance can only be grasped against the background of the times. Under the established church, heresy was a capital offense, and the denial of the trinity could mean prison. Towards the close of his life, Jefferson still felt that his battle for religious freedom was his hardest. This Unitarian who believed that the sum of true religion was “to love God with all thy heart and thy neighbor as thyself” argued that “speculative differences” should be as freely accepted as physical differences, and that “Reason and free inquiry are the only effectual agencies against error.” His statute proclaims, “Almighty God hath created the mind free, and manifested his supreme will that free it shall remain by making it altogether insusceptible of restraint…”

The Declaration of Independence launched a world-shaking idea that was to become a beacon of hope to men in every land and age. In an era that believed in the divine right of kings and the feudal system, the notion that men were created equal and possessed inalienable rights seemed either mad or inflammatory. Even the new world defied the proposition with chattel slavery, poll taxes, lack of schools for the poor, and lack of opportunities and rights for one-half the race, the women. The declaration brought no immediate reform, but it raised a standard towards which the young republic might advance. Indeed, the best of American history has been the gradual realization of the dream embodied in those words.

— From The Unitarian Register, April 1958

DOUGLAS, Emily Taft, (wife of Paul H. Douglas), a Representative from Illinois; born in Chicago, Ill., April 10, 1899; was graduated from the University of Chicago in 1919; engaged in the theatrical profession; organizer and chairman of the department of government and foreign policy for the Illinois League of Women Voters; secretary of the International Relations Center, Chicago, Ill.; elected as a Democrat to the Seventy-ninth Congress (January 3, 1945-January 3, 1947); unsuccessful candidate for reelection in 1946 to the Eightieth Congress; United States Representative to the United Nations Educational, Scientific and Cultural Organization (UNESCO); author; was a resident of White Plains, N.Y., until her death there on January 28, 1994.

Courtesy of the U.S. House of Representatives Historical Office 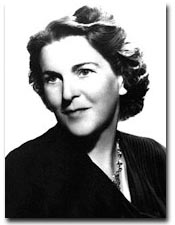 Emily Taft Douglas, who has been nominated as moderator, highest lay office in the American Unitarian Association, long has been active in Unitarian affairs. She is a member of All Souls’ Church (Unitarian), Washington, D. C., and a member of the Board of Contributing Editors of The Unitarian Register. She is active in the Unitarian Fellowship for Social Justice. In 1955, she was presented a Diamond Jubilee award by the General Alliance of Unitarian and Other Liberal Christian Women. Mrs. Douglas is a former United States representative from Illinois. Her husband, Senator Paul Douglas (D., III.) also is a Unitarian.

Her father is the late Lorado Taft, noted sculptor, and she is a distant cousin of the late President William Howard Taft.

As a United States representative, Mrs. Douglas served on the House Foreign Affairs Committee. In 1951 she was adviser to the American delegation to the UNESCO conference. She is widely known as an author and lecturer.

Among lesser known facets of her career is the fact that she once played the leading role of the mystery drama The Cat and the Canary when it was on Broadway. Her biographies attribute to her an especial skill in the baking of chocolate cake.

— From The Unitarian Register, February 1958