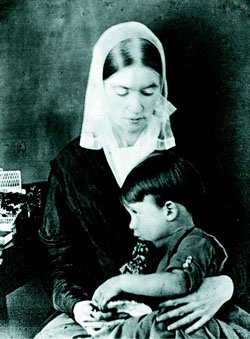 Lidian Emerson with their second son, Edward, who became a writer and editor like his father.
Courtesy of the Concord Free Public Library.

In 1834, Emerson’s travels on the lecture circuit took him to Plymouth, Massachusetts, where he met Lydia Jackson and fell in love for the second time. She was his intellectual partner, and he was enamored of the “perfect sympathy that exists between like minds.” They were married on September 14, 1835, at her family home. The next day, they drove to Concord where they would spend the rest of their married lives together in the large white house on the Cambridge Turnpike. Emerson’s mother, as well as a live-in cook, moved in with them. Lidian, as Emerson called his wife, had roses sent up from Plymouth for their new gardens. The young couple was hospitable, and there were frequent visitors and overnight guests.

Waldo and Lidian Emerson had four children: Waldo, born in 1836; Ellen, born in 1839 and named by Lidian for her husband’s first wife; Edith, born in 1841; and Edward Waldo, born in 1844. By all accounts, Emerson was good with children and his study was always open to them. There, a child would encounter curious objects, pencils and scissors to play with, or some other treat. As his son, Edward Waldo, explained: “He had a love and tenderness for very small children, and his skill in taking and handling a baby was in remarkable contrast to his awkwardness with animals and tools.” He did not, however, approve of silliness or loud laughter, especially on Sunday. He read poetry and prose to his children, and taught them Latin and Greek. They sat on his knee and asked endless questions. They helped their father with garden chores, and they accompanied him on long walks. Theirs was a spirited household. But sadly, Waldo, the first-born, died when he was five years old. Emerson was devastated, as his friend Judge Hoar described, “I think I was never more impressed with a human expression of agony than when Mr. Emerson led me into the room where little Waldo lay dead and said only, in reply to whatever I could say of sorrow or sympathy, ’Oh, that boy! that boy!’” 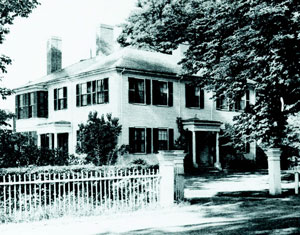 The Emersons called their Concord home “Bush” and the front parlor was frequently filled with friends and family.
Courtesy of the Concord Free Public Library.

Edith Emerson grew up and married Colonel William Hathaway Forbes. Ellen Emerson, who never married, became her father’s regular travel companion. She was devoted to him in his later years, and lived in the family home until her death in 1909. Emerson’s son, Edward Waldo Emerson, graduated from Harvard Medical School and married Annie Keyes. After his father’s death, he devoted himself to editing and writing about the literary men of his father’s generation. He was the editor of the centenary edition of Emerson’s works and the Journals of Ralph Waldo Emerson.

“Whenever we walked with him, he told us the name of every flower and showed us how many pine needles in each sheath the two kinds of pine had, and how the lichens grew thickest on the north side of every tree, how the ferns came up crozier-shaped, and how their seeds were on their leaves.”