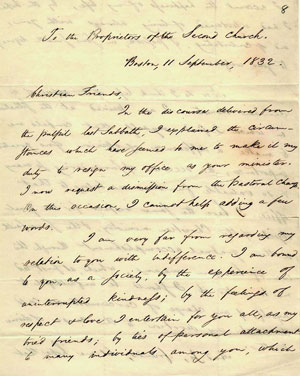 Emerson’s decision to leave the Second Church in 1832 was difficult. Historians usually cite his reason as his inability to administer the “Lord’s Supper,” or communion, in its present form as he could not dwell with “noxious exaggeration [on] the person of Jesus.” He loved his congregation, and they him, and a compromise might have been reached. But Emerson had other motives for resigning.

He did not want to pray publicly when he did not feel inspired. For Emerson, it was a matter of authenticity and integrity. “It is the best part of the man, I sometimes think, that revolts most against his being the minister,” Emerson wrote in his journal. “His good revolts from official goodness. If he never spoke or acted but with the full consent of his understanding, if the whole man acted always, how powerful would be every act and every word….The difficulty is that we do not make a world of our own but fall into institutions already made and have to accommodate ourselves to them to be useful at all. And this accommodation is, I say, a loss of so much integrity, of so much power.” Emerson questioned the role of the ministry entirely.

In addition, the routine of parish work was stifling to Emerson. He disliked tradition and authority, and the burden of carrying on the Emerson family history of serving wore on him. Ministry did not provide the spiritual and intellectual growth he craved. Emerson resigned because his growing conviction of self-reliance required him to escape the mold in which outside pressures had cast him.

CHRISTIAN FRIENDS: —I cannot go away without a brief parting word to friends who have shown me so much kindness, and to whom I have felt myself so dearly bound.

Our connection has been very short; I had only begun my work. It is now brought to a sudden close; and I look back, I own, with a painful sense of weakness, to the little service I have been able to render, after so much expectation on my part,—to the checkered space of time, which domestic affliction and personal infirmities have made yet shorter and more unprofitable.

As long as he remains in the same place, every man flatters himself, however keen may be his sense of his failures and unworthiness, that he shall yet accomplish much; that the future shall make amends for the past; that his very errors shall prove his instructors,—and what limit is there to hope? But a separation from our place, the close of a particular career of duty, shuts the book, bereaves us of this hope, and leaves us only to lament how little has been done.

Yet, my friends, our faith in the great truths of the New Testament makes the change of places and circumstances of less account to us, by fixing our attention upon that which is unalterable. I find great consolation in the thought that the resignation of my present relations makes so little change to myself. I am no longer your minister, but am not the less engaged, I hope, to the love and service of the same eternal cause, the advancement, namely, of the Kingdom of God in the hearts of men. The tie that binds each of us to that cause is not created by our connexion, and cannot be hurt by our separation. To me, as one disciple, is the ministry of truth, as far as I can discern and declare it, committed; and I desire to live nowhere and no longer than that grace of God is imparted to me— the liberty to seek and the liberty to utter it….

And now, brethren and friends, having returned into your hands the trust you have honored me with,—the charge of public and private instruction in this religious society— I pray God, that, whatever seed of truth and virtue we have sown and watered together, may bear fruit unto eternal life. I commend you to the Divine Providence. May he grant you, in your ancient sanctuary, the service of able and faithful teachers. May He multiply to your families and to your persons, every genuine blessing; and whatever discipline may be appointed to you in this world, may the blessed hope of the resurrection, which He has planted in the constitution of the human soul, and confirmed and manifested by Jesus Christ, be made good to you beyond the grave. In this faith and hope I bid you farewell.