“It was the noblest, most inspiring strain I ever listened to.” —Theodore Parker 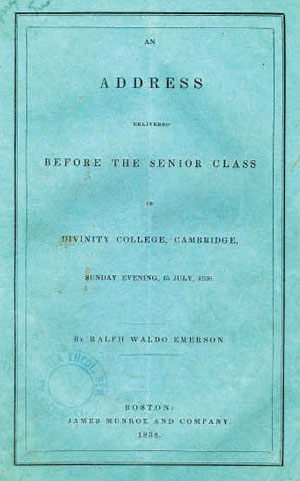 In 1838, the senior class at Harvard Divinity School asked thirty-five-year-old Emerson to deliver the commencement address. What happened aroused a storm of controversy. During that time of feverish dialogue on the role of religion and the church, on July 15, from the chapel in Divinity Hall at Cambridge, Emerson decried the historical “defects” of Christianity which, he said, were the mythologizing of Jesus and the fetishistic worship of the Bible. He professed “reverence unfeigned” for Jesus but denied his perfection. He proposed a counterweight to formal religion—not atheism, but a personal religious consciousness and selfreliance, believing that a divine nature is present in all persons. Emerson’s address was seen as an attack on the Unitarian establishment—and it was. He was by then recognized as a radical, and was denounced and acclaimed vigorously on all sides. Harvard did not invite Emerson to speak again until 1869.

“Let me admonish you, first of all, to go alone; to refuse the good models, even those which are sacred in the imagination of men, and dare to love God without mediator or veil. Friends enough you shall find who will hold up to your emulation Wesleys and Oberlins, Saints and Prophets. Thank God for these good men, but say ‘I am also a man.’ Imitation cannot go above its model. The imitator dooms himself to hopeless mediocrity. The inventor did it, because it was natural to him, and so in him it has a charm. In the imitator, something else is natural, and he bereaves himself of his own beauty, to come short of another man’s.”

“What in these desponding days can be done by us? The remedy is already declared in the ground of our complaint of the Church. We have contrasted the Church with the Soul. In the soul, then, let the redemption be sought. Wherever a man comes, there comes revolution. The old is for slaves. When a man comes, all books are legible, all things transparent, all religions are forms. He is religious. Man is the wonderworker. He is seen amid miracles. All men bless and curse. He saith yea and nay, only. The stationariness of religion; the assumption that the age of inspiration is past, that the Bible is closed; the fear of degrading the character of Jesus by representing him as a man; indicate with sufficient clearness the falsehood of our theology. It is the office of the true teacher to show us that God is, not was.”

“Truly speaking, it is not instruction, but provocation, that I can receive from another soul. What he announces, I must find true in me or reject.”

“The capital secret of his profession, namely, to convert life into truth [the failed preacher] had not learned….The true preacher can be known by this, that he deals out to the people his life—life passed through the fire of thought.”

“Alas for the unhappy man that is called to stand in the pulpit, and not
give bread of life.”