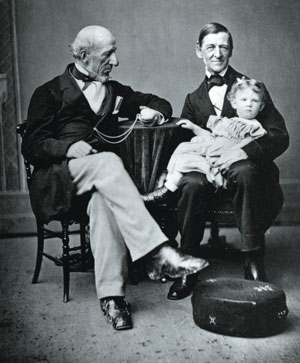 After a lifetime of struggle with illness, Emerson’s health began to fail in 1871 at the age of sixty-eight. He took one of his rare vacations, to California, that year but it sapped his strength. In 1872, the Emerson home caught on fire. Although the roof was destroyed, neighbors and firemen responded and managed to save most of the books, furniture, and papers. The family moved temporarily to the Old Manse causing Emerson to feel uprooted and demoralized. To help, friends raised money to send Emerson and Lidian to Europe. When they returned a few months later, a great crowd greeted them at the train station and a brass band played Home Sweet Home. The Emersons walked under an arch of flowers into their rebuilt home where friends had taken care of the repairs and made sure that Emerson’s precious books and papers were returned to their familiar places in his study.

Emerson lived another ten years but he suffered a long, slow decline. He continued to lecture, but as his eyes were failing his son often had to stand with him on the podium to point to the place in his manuscript and to read words he could not make out. His hearing became bad, and eventually his voice left him. But Emerson was well taken care of due, in large measure, to his devoted, unmarried daughter, Ellen who continued to live in the family home and who helped her father publish his final works. He was always surrounded by friends and family, who now included his spirited grandchildren. As his son wrote, “his own last days were serene and happy as should befall such a life and such a belief.”

When “The Sage of Concord” died in his sleep on April 27, 1882, he was seventy-nine years old. The bells of the church began to toll at 9:00 that evening, once for each year of his life, and soon all of the village knew that their most beloved citizen was dead. Concord was draped in black. The railroad ran extra trains to accommodate the out-of-town mourners. The First Parish Church’s floors had to be strengthened to hold all the extra people attending the funeral service. Others remained outside, despite the cold, gloomy weather. Ralph Waldo Emerson was laid to rest in Sleepy Hollow Cemetery. Louisa May Alcott wrote in her journal, “Our best and greatest American gone. The nearest and dearest Friend father has ever had, and the man who has helped me most by his life, his books, his society. I can never tell all he has been to me….Illustrious and beloved friend, good-by!”

“Within I do not find wrinkles and used heart, but unspent youth.”
—Ralph Waldo Emerson

“To-day, in the historic village of Concord, Massachusetts, the neighbors of Ralph Waldo Emerson have stood in silent and unspeakable emotion around his open grave. We are all deeply moved by his death, because we have been deeply moved by his life. ‘They are the greatest who do and teach,’ says Jesus, and this man has both lived and taught the divinest lessons—himself a moral hero and a child of the Uncreated Light.”
—Charles G. Ames 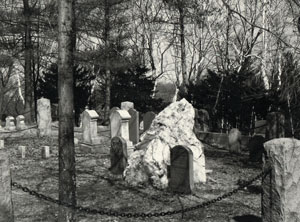 On April 27, 1882, Ralph Waldo Emerson’s body expired. But as the Reverend Charles Ames said in his memorial address in Philadelphia, “I think no man has ever died on this continent whose departure could leave so rich and lasting an after-glow on our sky.”

Through his lectures, essays, and other writings, Emerson has joined the American pantheon. His work is among the greatest America has produced or, as the historian James Truslow Adams wrote, “In no other author can we get so close to the whole of the American spirit.” Emerson’s radical ideas gradually became more prevalent. He lived the truth, and his imagination, idealism, and stern sense of duty made these ideas take root and live on. In hisEssay on Democracy, James Russell Lowell declared that two men, Ralph Waldo Emerson and Abraham Lincoln, stood preeminent as products of American democracy. He is taught everywhere in the world. His words have been translated into many languages. Each landmark anniversary of his birth and death has been celebrated in hundreds of communities, including this one, in 2003. Emerson brought fresh spirit into religion, and made people willing to rethink their old

He believed in people, and admired not just the scholar but the woodchopper, the fisherman, the servant. He raised everyone to his own level. He believed that we must think our own thoughts, fresh and unhampered. We should, as he did, search out new truth, meet in kindness and honesty, each respecting the other, looking for the good and building on it.

“He was the philosopher of democracy…the one citizen of the
New World fit to have his name uttered in the same
breath withthat of Plato.” —John Dewey