Emerson, Nature, and the Environment 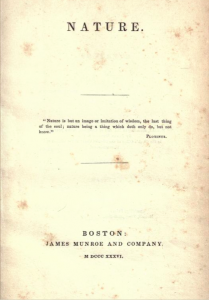 Emerson’s “Nature” is a timeless work of environmental writing.

Emerson was consumingly interested in the connection between man and nature. “The greatest delight,” he wrote, “which the fields and woods minister, is the suggestion of an occult relation between man and the vegetable….Yet it is certain that the power to produce this delight, does not reside in nature, but in man, or in a harmony of both.” He continues, “Nature, in its ministry to man, is not only the material, but is also the process and the result.”

Emerson’s Nature, published anonymously in 1836, is a timeless investigation of nature’s gifts, benefits, and lessons. His writing was captivating and had enormous influence on Henry David Thoreau, John Burroughs, Mary Austin, and Walt Whitman. His literary voice is sublimely descriptive: “Crossing a bare common, in snow puddles, at twilight, under a clouded sky, without having in my thoughts any occurrence of special good fortune, I have enjoyed a perfect exhilaration.” The woods were his cathedral. He saw the handiwork of God everywhere. “In the woods,” he wrote, “we return to reason and faith.” 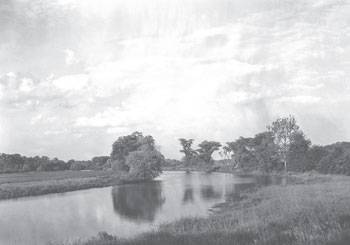 Walking in Concord brought joy and inspiration to Emerson. Courtesy of the concord Free Public Library

Nature also expressed Emerson’s social conscience and a call to action. He insisted that we need to witness the natural spectacles displayed perpetually around us. As he wrote, “the invariable mark of wisdom is to see the miraculous in the common.” This sentiment influenced people like John Muir, whom Emerson met in 1871 at Yosemite. Muir was already an admirer of Emerson, long before he began his remarkable career as a naturalist, writer, and conservationist, founding the Sierra Club in 1892 and inspiring President Theodore Roosevelt to establish national monuments and parks. Muir described Emerson as “serene as a sequoia.” He carried a volume of Emerson’s essays with him on his wanderings.

“In the woods, we return to reason and faith. There I feel that nothing can befall me in life, —no disgrace, no calamity, (leaving me my eyes,) which nature cannot repair. Standing on the bare ground, —my head bathed by the blithe air, and uplifted into infinite space, —all mean egotism vanishes. I become a transparent eye-ball; I am nothing; I see all; the currents of the Universal Being circulate through me; I am part or particle of God.”
—Ralph Waldo Emerson