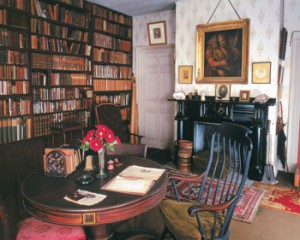 Emerson’s study, containing the circular table he designed.
Courtesy of the Concord Museum.

The inspiration for Emerson’s writing didn’t just come from a starry sky over Walden Pond or from a conversation with a local laborer. It came from endless reading which he tired only of when his eyes failed. It came from traveling, befriending all sorts of people, and from entertaining friends who brought rousing conversation to the Emerson home. It came from outside stimuli, and from internal, spiritual places.

Emerson was thoroughly engaged in life. His first book, Nature, appeared in 1836. He wrote easily, but publishing was another matter. He agonized, revised endlessly, and tinkered with words and sentences. He could spend months on an essay, and years on a book. Still, ambition drove him. Essays on transcendentalism, religion, slavery, moral law, self-reliance, power, and women ’s rights appeared in the 1840s in The Dial, the magazine of the Transcendentalist movement, which he also edited for two years. Almost all of his essays were first delivered as lectures. His first book of essays was published in 1841, and his second in 1844. His book Representative Men was published in 1850; English Traits in 1856; The Conduct of Life in 1860; Society and Solitude in 1870; Parnassus in 1874; and Letters and Social Aims in 1875. 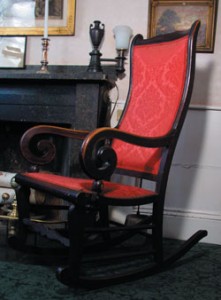 Emerson’s rocking chair was a favorite place for contemplation.
Courtesy of the Emerson House in Concord.

Emerson’s first collection of poetry, Poems, was published in 1847, but it was not his first attempt by any means. From boyhood, Emerson was a poet. His son, Edward, divides his father’s poetic work into three stages: youthful or imitative, revolutionary, and mature. His earliest poetic influencers were Pope and Campbell; his own early work was fanciful and unimaginative. As years went on, his poetical work became simpler, more original and vigorous in language. Experiences with his ministry, health, the death of his first wife, and his uncertainty about his future are recorded during this period. Finally, his poetry was insightful and pure. During his adult years, Emerson published poetry in The Dial, May-Day and Other Pieces in 1867, and Selected Poems in 1876. Emerson’s poetry, and his writing about poetry especially in his essay The Poet, inspired poets Emily Dickinson and Walt Whitman. His thinking on the subject continues to be of great interest to modern-day poets.

After Ralph Waldo Emerson resigned from the ministry in 1832, his work involved public speaking, writing, and editing. Speaking provided an income to support his family and retarded brother, and it brought him fame. He began his lecture career in Boston with popular lectures on natural history in 1833–34; on biography in 1835; and on English literature in 1835–36. In 1837 his American Scholar oration at Harvard College created great interest among a secular audience. His 1838 address at the Harvard Divinity School brought controversy and invitations for new speaking engagements, but it also signaled the end of his preaching career. He preached his last official sermon in January 1839.

For many of his “courses” of lectures, Emerson acted as his own booking agent, and beginning in the 1840s he spoke dozens of times each year on grueling train tours across the country. He enjoyed the latitude of the speaking platform, and once wrote, “I please myself with contemplating the felicity of my present situation—may it last! It seems to me singularly free, and invites me to every virtue and to great improvement.” Between 1833 and 1881, Emerson gave almost fifteen hundred lectures in twenty-two states and Canada.

When he was home, Emerson could be found most often in his study in his Concord home, sitting in his rocking chair or at the circular table he designed to rotate and keep books and notes at his finger tips. He wrote every day, alone in his study, usually for six hours by day and two or three in the evening. But, as his son, Edward, wrote, “the woods were his best study during the years of his greatest spiritual activity, and the study, so-called, at home, rather his library and writing room.” Emerson sometimes carried a notebook with him, but more often he recorded his thoughts once he returned home from a sojourn outdoors or to the city. All through his life he kept a journal, and his son published these volumes after his father’s death.

“Substance is much, but so are mode and form much. The poet, like a delighted boy, brings you heaps of rainbow bubbles, opaline, air-born, spherical as the world, instead of a few drops of soap and water.” —Ralph Waldo Emerson