When Emerson spoke, he had a way of making everyone “feel taller.”
Courtesy of the Andover-Harvard Theological Library, Harvard Divinity School.

When “the Reverend Emerson” resigned from parish ministry at the Second Church in Boston in 1832, in a sense he exchanged one kind of pulpit for another. In November 1833, when he delivered his first lecture, he had just returned from his first trip to Europe where he was deeply affected by what he saw and whom he met in Italy, France, England, and Scotland. Every experience was fodder for his lectures. His years as a preacher had also served him well. He had honed his public speaking skills, and was now a compelling communicator.

At the same time, it was a happy coincidence that the English lyceum movement had recently taken root in America, providing “mutual education and rational entertainment” for lyceum members and the general public through lectures, debates, and dramatic readings. “The lyceum is as good a pulpit as any,” Emerson thought.

The full force of Emerson’s intellect, his endless inquiry both spiritual and secular, would now expose him to larger, more diverse audiences. In the 1830s, Emerson became a familiar figure in lyceum halls in Boston, Cambridge, Framingham, Salem, and Gloucester. In the 1840s he extended his territory to New York City; Baltimore, Maryland; and Philadelphia, Pennsylvania; as well as new venues in New England, from Providence to western Massachusetts to Maine. In 1847–48, he lectured in England, and in the 1850s he began lecturing in the “west”: New York state, Ohio, western Pennsylvania, Missouri, Illinois, Indiana, Wisconsin, Michigan, and Canada. Late in his life he even lectured in San Francisco. As he admonished himself in his journal: “Do, dear, when you come to write Lyceum lectures, remember that you are not to say, What must be said in a Lyceum? but what discoveries or stimulating thoughts have I to impart to a thousand persons? not what they will expect to hear but what is fit for me to say.” 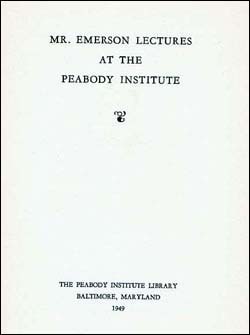 Emerson lectured throughout America, including in Baltimore at the Peabody Institute.
Courtesy of the Andover-Harvard Theological Library, Harvard Divinity School.

Perhaps his greatest gift as a lecturer was his ability to make everyone “feel taller.” He so aspired for integrity and purity that his example gave strength to others. A washer woman who always attended his lectures in Boston was asked by a reporter if she understood Mr. Emerson. “Not a word,” she replied, “but I love to see him standing up there thinking everyone else is just as good as he is.” As one of Emerson’s biographers explained, “That was his secret. Emerson was any one of us, but any one of us at our best. He made us all feel at home with greatness.”

“Mr. Emerson was always preeminently the preacher to his own generation and future ones, but as much—if not more—out of the pulpit as in it; faithful unto the end of his early chosen profession and the vows of his youth.” —Elizabeth Palmer Peabody