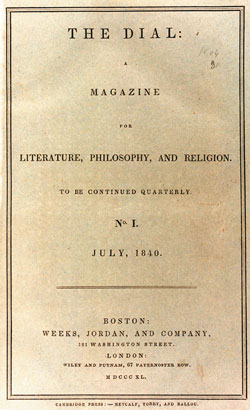 Emerson’s influence on literary figures of his time and their work is irrefutable. He encouraged many aspiring writers by reviewing and promoting their manuscripts and supporting them financially. When he assumed the editorship of The Dial in 1842, he had a vehicle in which new and established writers could publish—“a useful clearinghouse for new ideas.” Margaret Fuller, Theodore Parker, Henry David Thoreau, Charles King Newcomb, Ellen and Caroline Sturgis, Jones Very, Ellery Channing, Henry Hedge, Charles Dana, and Eliza Clapp were among his contributors. Through The Dial, Emerson also exposed American audiences to English literature and German thought and literature.

Emerson was directly responsible for having the work of his friend, the Englishman Thomas Carlyle, Harvard Divinity School. published in America including The French Revolution which Emerson had “contracted for, financed, advertised, promoted and reviewed.” His hospitality, sympathy, friendship, and encouragement helped to steer Henry David Thoreau toward great achievement. It has even been said that Thoreau would not have been Thoreau without Emerson. Whether or not that is true, Emerson is forever linked to Walden (Henry Thoreau built his cabin on land owned by Emerson) and to Thoreau’s later literary investigations of nature. The poet Walt Whitman heard Emerson speak and wrote that his own ideas were “simmering and simmering and Emerson brought them to a boil.” When, in 1855, he sent Emerson his book of poetry entitled Leaves of Grass, Emerson wrote to him, “I greet you at the beginning of a great career.” Emily Dickinson called Emerson’s Representative Men an investigation of equality and individual talent—“a little granite book you can lean on.”

Through the ages, the words of these and hundreds more echo Ralph Waldo Emerson. Modern writers, environmentalists, motivational speakers, philosophers, politicians, and activists claim him. As James Truslow Adams wrote, “In no other author can we get so close to the whole of the American spirit.” 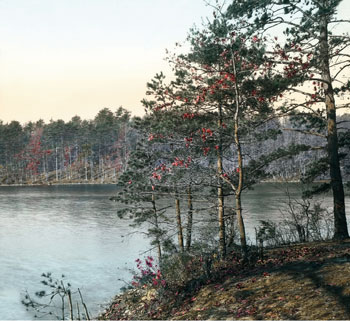 When Thoreau built his cabin on Emerson’s property at Walden Pond, his writing on the subject would forever change American literature.
Courtesy of the Concord Free Public Library.

“As for where I ventured—that was first of all down the street to tangle…with Emerson. Was there ever a thinker more at odds with Confucius? Self-reliance! What an idea. For anyone Emerson threatens to burn down the house; for this nice Chinese girl he seemed to torch the whole countryside. And yet his call, not only for a new literature, but for a literature endlessly new, for writers who write not only against the past but against their own best inventions—that seemed a call I could hear. There was room in his program for me, for anyone; anyone could be an American writer, she only had to find her power, then find it again; to name herself Man Thinking. Emerson was the first subversive, and still inspires every serious writer. The goal is still to gather up our times’ rejected thoughts, and to return them, if we can, with a certain alienated majesty.” —Gish Jen