“If you put a chain around the neck of a slave, the other end fastens itself around your own.” —Ralph Waldo Emerson 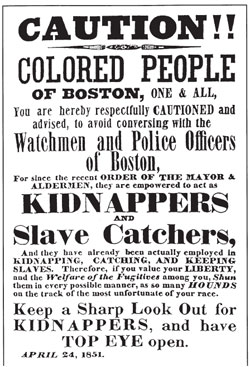 Boston’s Vigilance Committee circulated thousands of copies of posters like this one when the Fugitive Slave Act was passed.

Emerson had visited slave-holding territories when he traveled to the South in 1826–27 and encountered first-hand the shocking treatment of countless human beings. While he considered speaking on public questions “odious,” “hurtful,” and “meddling,” he was speaking against the slave trade as early as the 1830s. In 1832, when he became pastor of the Second Church in Boston, he opened his pulpit to anti-slavery speakers. In 1844, he delivered a rousing speech in Concord on the abolition of slavery in the British West Indies. As his son, Edward Waldo Emerson, wrote, “from the beginning of the anti-slavery struggle Mr. Emerson stood for Freedom.” He did not, however, join the formal abolitionist movement for while he honored the courage and principles of its leaders he disliked their methods, finding them sometimes “narrow” and “bitter.” He claimed that his broader work included their cause. He wanted only to spread kindness and joy, and to lift men higher than they already were.

In 1850, when Congress passed the Fugitive Slave Act, Emerson was uncompromising. This law, a national tragedy in his view, mandated the return of “runaway slaves” from any part of the country and made it illegal to assist them. It was heinous to Emerson. “This filthy act,” he wrote, “was made in the nineteenth century, by people who could read and write. I will not obey it, by God….This is a case of conscience, a call for compassion, a call for mercy. Slavery poisons and depraves everything it touches….Union is a delectable thing, and so is wealth, and so is life, but they may all cost too much, if they cost honour.”

Emerson spoke against slavery in Boston, Concord, and other places; he published essays and poems that were widely read; he gave money to abolitionists and entertained John Brown and Angelina and Sarah Grimké in his home. To those who refused to do battle on the subject he responded, “Do not say things. What you are stands over you the while and thunders so that I cannot hear what you say to the contrary.” When the leading Boston abolitionist William Lloyd Garrison commissioned a poster entitled Heralds of Freedom, he included Emerson in the group of reformers it depicted.

Emerson spoke out against the slave trade as early as the 1830s. Courtesy of the Peabody Essex Museum.

“If it shall turn out, as desponding men say, that our people do not really care whether Boston is a slave port or not, provided our trade thrives, then we may at least cease to dread hard times and ruin. It is high time our bad wealth came to an end. I am sure I shall very cheerfully take my share of suffering in the ruin of such a prosperity, and shall very willingly turn to the mountains to chop wood and seek to find for myself and my children labors compatible with freedom and honor.” —Ralph Waldo Emerson