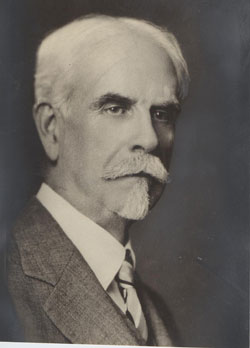 Elmer Severance Forbes was born at Westboro, Massachusetts, on September 12, 1860, of an old New England stock that had been eminently serviceable in Massachusetts for ten generations. He graduated at Amherst College in 1881, and entered the ministry of the Protestant Episcopal Church, becoming one of the staff and later the rector of St. John’s Church in Jersey City. It was a large parish in a location where many and diverse social problems had to be met and the young clergyman was soon absorbed in matters of poor relief, of housing and hygiene, of the adjustments of family life, and of the care of the delinquent and defective. He was a diligent and cheerful worker in both church and community, but gradually he found himself becoming more interested in the social applications of religion than in the theologies and rituals of the church. When he realized that he no longer believed the creeds, he honorably withdrew from the Episcopalian communion and sought admission to the Unitarian ministry. He quickly won the confidence and affection of his new associates while retaining the good will of many of his former comrades. His rare gifts of mind and heart together with his successful experience both as a parish minister and as an expert in social work, all pointed to him as the right man to inaugurate the work of the new Department of Community Service of the American Unitarian Association. For twenty-one years, until his retirement in 1929, he administered that department with diligence and fidelity, efficiently representing the interest of Unitarians in social reforms. It was at first a pioneer service, for the Unitarian communion was the earliest of the Protestant churches to initiate such an enterprise and many people had to be persuaded of its importance. Mr. Forbes traveled far and wide and increasingly convinced ministers and people not only that a collective endeavor for social reforms was possible and practical, but also that there was an essential unity of purpose in the Unitarian churches in regard to the application of religious principles to social problems. He organized and addressed many Conferences, gathered and edited the forty or fifty influential and widely distributed pamphlets published as the “Social Service Bulletins”; prepared the volume on the Social Ideals of a Free Church, counseled with many ministers and committees in regard to their social agencies and activities, represented the Unitarian Fellowship at interdenominational conferences at home and abroad and served on many administrative boards and committees—always judicious, persuasive, attractive. He was not a violent or aggressive reformer, but gentle of speech, courteous and considerate in manner, fraternal in spirit. His judgments were deliberate but no plan for human welfare failed to secure his study and interest, and, if found worthy, his resolute advocacy. He fought error and evil, but always chivalrously.

Elmer Forbes was a man of true spiritual refinement, and at the same time and in the best sense a sensible and practical man of the world. He was eager to apply religious faiths and truths to healthy uses. He was always ready with wise counsel and self-denying service, bold in pleading for unfamiliar reforms and in denouncing popular mistakes and injustices. Kindly and tolerant, he was a charming companion and loyal friend. He died at Plattsburg, New York, July 2, 1933.