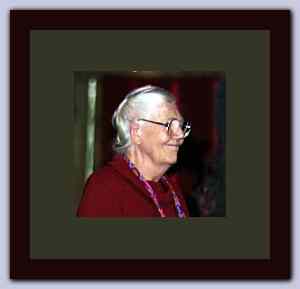 Elise Boulding, Ph.D., has been an important peace activist since World War II. Author of eleven books and contributor to many more, she built the Peace Studies program at Dartmouth College, and both she and her husband, Dr. Kenneth Boulding, were active all their lives in conflict-resolution studies and in the more important groups that have been working for world peace. Elise Boulding spent the mid-nineties writing Cultures of Peace: The Hidden Side of History, and she still makes her peaceful presence felt in the corridors of power.

The course of Dr. Boulding’s adult life grew out of a childhood perception. “I was born in Norway in 1920,” she said,” and we came to this country when I was three. My early memories were of war movies and Mom being homesick for Norway.” As a little girl, Elise was frightened by the images of war, so she decided on a plan. If war broke out again, she would return to Norway, the peaceful homeland for which her mother longed, where she knew she would be safe.

“Then came World War II,” she said, “and the invasion of Norway. And that was when I realized that there was no safe place on earth. And I knew that I had found my life’s mission.”

—By Susan Barber, Courtesy of The Spirit of Ma’at

Click here for supplemental reading about Elise Boulding on Amazon.