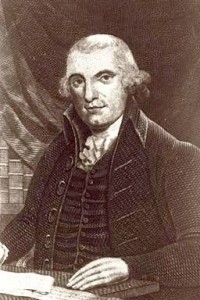 An early Universalist in Pennsylvania, Elhanan Winchester was born in Brookline, Massachusetts on September 30, 1751. His father was a farmer and shoemaker, and a religious wanderer from New Light Congregationalist to residence at a Shaker village. Although he did not receive much formal education, Elhanan was largely self-educated and he became a master at languages. In 1769 he underwent a conversion, and preached to “New Lights” at his father’s house and elsewhere. But he left Congregationalism and affiliated with a group of Baptists who believed in an open communion. He married Alice Rogers of Rowley, Massachusetts, but she was only the first of four wives who suffered and died, along with seven out of eight children stillborn, leaving Winchester frequently grief stricken. In 1771 he was ordained during a revival in Rehobeth, Massachusetts, but he left when he became a convert to closed communion. This controversy continued, and eventually he left Rehobeth to live first in nearby Bellingham, and then he preached in Grafton. In 1774 he was called to serve a Baptist church in Welch Neck, South Carolina. After his first wife died, he returned to Boston and married again, but she died soon thereafter. After a visit to Virginia, he married his third wife, but she died in 1779.

During this period of such sadness, Winchester read Paul Siegvolck’s The Everlasting Gospel, a German book which apparently received wide circulation among the pietists who settled in the mid-Atlantic states. For the first time he learned that all God’s people would be redeemed by Jesus to a final state of bliss. He continued as a Baptist preacher, but his preaching was much more accepting of converts regardless of theological orientation. In addition, many slaves were welcomed into his congregation. While they were converted to Christianity, Winchester began to denounce slavery itself. In 1779, he left South Carolina for New England, intending to return. He continued to preach as his doubts about his faith increased, and within the year he was convinced of the truth of Universalism. On his way back to South Carolina, Winchester happened to stop in Philadelphia. While he was there, he received an invitation to preach at a Baptist church with no minister. He won wide acclaim, but his parishioners began to notice that it appeared that in his preaching, salvation through Christ was available to all. His faith in Universalism was solidified when he read Restitution of All Things by Sir George Stonehouse. In January 1781 he was called before a group who asked him if he believed in Universal Restoration, and Winchester said he did. He agreed to leave that congregation, but many of his former parishioners ended up forming a Society of Universal Baptists, who were able to meet at the University of Pennsylvania for four years. He married for the fifth time in 1784. His congregation built their first meetinghouse on Lombard Street in Philadelphia.

Winchester also became a frequent visitor of the Universalist preacher Dr. George De Benneville. In 1787 he traveled to England, where he did itinerant preaching in many locations and met Joseph Priestley, Thomas Belsham and Richard Price. In 1788 he published The Universal Restoration, Exhibited in Four Dialogues. He returned after six years. In 1794 he preached all over New England, and played a prominent role in the Universalist Convention in Oxford, Massachusetts, where he served as moderator. In 1796 he returned to his old congregation in Philadelphia. He became ill during this time, and Dr. Benjamin Rush, his old parishioner, attended to him. That fall he went to Hartford. After a dramatic appearance at a funeral, where he spontaneously preached on the resurrection, he received an invitation to speak, and he did so twice a week. He continued to preside over meetings there until his death on April 18, 1797.