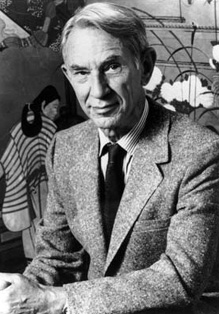 In 1937, with World War II beginning to simmer in the Pacific, Reischauer left Japan, moving first to Seoul and later to Beijing. During this time he developed a Romanization system for Korean (the McCune-Reischauer System). In 1938, he returned to Harvard, and completed his Ph.D. in 1939.

After Pearl Harbor, Reischauer received a commission in the United States Army and taught cryptanalysts the Japanese language at a secret Signal Corps school in Washington, D.C. Upon Japan’s surrender, he moved to the Department of State and worked on American policy for the Allied occupation of Japan. In 1946, he left his job in Washington and moved back to Harvard, where he taught Japanese and worked on dictionaries and other language aides.

Reischauer taught and wrote over the next ten years, but after his first wife died in 1955, he left the daily grind of academia and went back to Japan. That year, he met journalist Matsukata Haru, the granddaughter of prince Matsukata Masayoshi. They were married in 1956, and Reischauer once again moved back to Harvard, this time choosing to focus on studying and analyzing East Asian society in general.

In 1960, following the hairy passage of the new Japan-U.S. security treaty, Reischauer wrote a famous article in Foreign Affairs entitled “The Broken Dialogue,” asserting that Japan should not be subordinated to the United States in the making of foreign policy. This caught the attention of new president, John F. Kennedy, who appointed Reischauer as U.S. Ambassador to Japan in 1961.

Virtually no Americans at the time were as qualified for the job as Reischauer was, and he and his wife dove into the world of diplomacy head-first. They personally toured the country, drawing favorable reactions wherever they went. The only low point in Reischauer tenure came on March 24, 1964, when he was stabbed outside his office by a “mentally disturbed” youth. He asked to be taken to a Japanese hospital—a fateful decision, as the Japanese hospital accidentally gave him a blood transfusion infected with hepatitis. After recovering at an Army hospital in Hawaii, he returned to Japan, continuing his ambassadorial duties until he resigned in 1966 and, yet again, returned to Harvard.

In 1968, he was awarded the First Class of the Grand Imperial Order of the Rising Sun by Emperor Hirohito and Prime Minister Sato Eisaku. He continued writing, publishing Japan: The Story of a Nation and The Japanese through the 1970’s, and in 1973 founded Harvard’s Japanese studies institute, which now bears Reischauer’s name.

Click here for supplemental reading about Edwin Reischauer on Amazon.