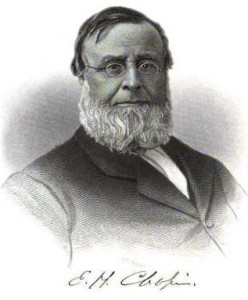 One of the leading Universalist ministers in the 19th century, Chapin made his name primarily as a marvelous orator who became a popular public speaker. He was born on December 29, 1814 in Union Village, New York. Rebelling against an orthodox background in the 1830’s, Chapin was ordained in 1838. His first parish was in Richmond, Virginia, followed by service in Charlestown, Massachusetts from 1841-1847. Early in his career he showed interest in various reform movements, and appeared at legislative hearings on the death penalty. In 1845 he helped edit, along with J. G. Adams, Hymns for Christian Devotion; especially adapted to the Universalist Denomination, which became the most widely used hymnal among Universalists. Chapin also published a popular “gift book” that year, Hours of Communion. He became Hosea Ballou’s associate at the Second Universalist Society in Boston, and was installed on January 28, 1846, but stayed only briefly. He encountered some problems with debt while he was in Boston. Eventually he came to differ from Ballou in his theological orientation. Chapin held Restorationist opinions so that he believed that there would be limited misery after death for those who sin, but eventual reconciliation with God for all. His preaching was less oriented toward theological subjects and more reform based.

In 1848 he was called to the Fourth Universalist Society (popularly known as the Church of the Divine Paternity after a new building was erected on Fifth Avenue in 1867) in New York, where he remained until his death in 1880. This growing parish bought the Church of the Divine Unity in 1852. While he was minister there he received the highest salary among Universalist clergy, $5,000 in 1855. In the 1850’s he worked hard to relieve the debt of the Clinton Liberal Institute, and even convinced Henry Ward Beecher to give a lecture to help out.

Chapin was a strong supporter of denominational education efforts, and spoke at the laying of the cornerstone for Canton Theological School. He was outspokenly anti-war, and attended a World Peace Convention in Germany in 1850. He was also active in the temperance movement, and gave an address at a Massachusetts convention in 1853. This reform spirit extended to women’s rights, too. He called for legal equality with men, and more educational opportunities. Many of his ideas for the social reform of society were summarized in Humanity in the City (1854) where Chapin expressed his outrage at how poverty affected children, and how Christianity must be put into practice to change society. The year before he had published a series of lectures, Moral Aspects of City Life, in which he called for the relief of poverty and the eradication of vice. In addition to food and shelter, he called for more employment opportunities for the poor.

During his active ministry in New York, he may have been the most well known Universalist minister in America. He was especially friendly with P.T. Barnum, who was attracted to Chapin because he was a jokester, and like Barnum, loved puns. At one time the two friends were compared to Barnum’s Siamese Twins, Chang and Eng. Beecher wrote that Chapin’s speaking abilities could put a person in a trance. He died in New York on December 26, 1880, and the service commemorating him at the Church of the Divine Paternity was according to Henry Whitney Bellows more than three hours long. Reflecting on the class difference between them, Bellows referred to Chapin as “coarse,” but also revered his unsectarian nature, and “his kind, genial, hearty voice.” Chapin’s wife became active in helping to establish the Chapin Home for the Aged and Infirm in 1869, and it became a fitting memorial to her famous husband.