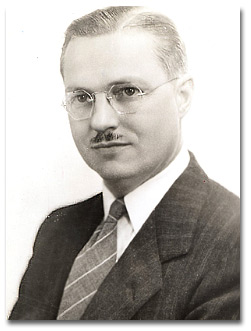 Edwin Henry Wilson was born on August 23, 1898, in Woodhaven, New York. He was raised in Concord, Massachusetts, where he attended the First Parish Church, a Unitarian fellowship. Wilson’s father had no use for the church; it was his mother who introduced him to Unitarianism, albeit of the conservative variety.

During World War I, Wilson served in the Army Signal Corps. In 1922, he received a bachelor’s degree in business administration from Boston University. After a brief period as a sales manager, he returned to school in 1924 to attend the Meadville Theological School, at that time located in Meadville, Pennsylvania, and exclusively Unitarian. (The school moved to Chicago in 1928. Meadville had a long-standing relationship with Universalist Lombard College—a relationship which was formalized in 1964 when the name was altered to the current Meadville Theological School of Lombard College.) Wilson graduated from Meadville in 1926 with degrees as a graduate of divinity and doctor of divinity, after which he spent a year abroad as a Cruft Fellow, studying at the Sorbonne in Paris.

Throughout his life, Wilson maintained a dedication to learning, but it was during the period when he was a matriculated student that he became exposed to and convinced of the validity of the humanist outlook. His conviction that “humanism has time, science, and human need on its side” proved to be life-long.

Ed Wilson’s humanist career began in 1929 when he became a regular contributor to The New Humanist, then a mimeographed newsletter published by the Humanist Fellowship in Chicago. Primarily composed of students from a number of universities and colleges in the Chicago area—in particular, the University of Chicago—the fellowship was a forerunner of such humanist organizations as the American Humanist Association. By 1930, Ed Wilson was the managing editor of the publication (no longer mimeographed but printed) as well as one of the co-owners. 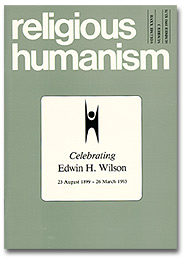 Nineteen hundred thirty-three was a milestone year for Wilson. It marked both the publication of “A Humanist Manifesto” in The New Humanist and the beginning of his fifty-two year marriage to Janet Wilson. The Wilsons had two sons, John and Dana.

When The New Humanist ceased publication in 1936 due to lack of funds, Wilson continued to spread the humanist message with his own modestly produced Humanist Bulletin. In 1941, that was succeeded by The Humanist, still in publication today. Wilson served as editor of The Humanist for sixteen years (consecutively from 1941 to 1956 and then as interim editor for a period between 1963 and 1964). In addition to editing and contributing to The Humanist, he was also one of the founders of the American Humanist Association, incorporated in 1941, and served as its executive director from 1949 to 1970. Subsequently, he was a member of its board of directors and was named the association’s official historian.

In 1952, Wilson participated in the founding and naming of the International Humanist and Ethical Union (based in the Netherlands), uniting the humanist movement worldwide. He remained an active member for forty years.

Wilson’s dedication to humanism earned him much respect and many honors. In 1955, he was awarded the American Humanist Association’s Humanist Merit Award. In 1978, he received the Distinguished Service Award, the Unitarian Universalist Association’s most prestigious honor to the cause of liberal religion. And in 1979, he was named the AHA’s Humanist of the Year.

Early in his career, Dr. Wilson contributed to the body of humanist liturgy by collecting hymns and services, even writing a hymn called “Where Is Our Holy Church?” During a 1987 interview with Beverley M. Earles (currently an officer of the American Humanist Association, but at that time a doctoral student of religious studies), Earles asked Wilson how he thought he’d be remembered. Wilson laughingly replied that most likely it would be as the composer of that hymn.

Dr. Wilson was a primary author of both Humanist Manifesto I (originally published in 1933 as “A Humanist Manifesto”) and Humanist Manifesto II (1973). He knew that both the consensus process of creating the first manifesto and its publication were significant events worthy of recording in this book, which he wrote over the course of many years during the 1970s and 1980s.

Wilson remained a fierce advocate of religious humanism his whole life. In the interview with Earles, she reported to Wilson that she had heard said of humanists: “They’re atheists who can’t quit the habit of going to church.” To this somewhat lighthearted challenge, Wilson responded that he thought churchgoing “was a good habit. It organizes one’s life. It’s where your friends are. I find a great deal of stimulation in the institution of continuing education.” In fact, Wilson always equated the humanists’ quest for greater knowledge while striving toward the ideal of a “good life” as a form of continuing education.

A productive and vigorous man all his life, Ed Wilson died in Salt Lake City, Utah, on March 26, 1993, at the age of ninety-four.

Introduction to
The Genesis of a Humanist Manifesto
by Edwin H. Wilson

The Genesis of a Humanist Manifesto is Edwin H. Wilson’s story of how the humanist manifesto of 1933 was shaped, how it came to have thirty-four prominent endorsements, how it was published, and, ultimately, its historical impact. Wilson writes from his position as one of the originators of the project—a man who chose to live and work his entire life by his commitment to the manifesto’s principles.

Dr. Wilson recorded the events surrounding the 1933 manifesto some forty to fifty years after they occurred, and he died before a publisher had been secured. This decades-long lag time can be partially explained by Wilson’s prodigious career as a professional humanist: for most of his life he was simply far too busy to write his memoirs. I think, too, that the passing decades eclipsed Wilson’s recollection of the significant socioeconomic and political conditions of the 1920s and 1930s which contributed to the growth of humanism and precipitated publication of “A Humanist Manifesto.” The reader will find few references, and then only in passing, to these conditions. Wilson seems far more preoccupied with honoring his colleagues who played a role in the development of humanism. He seems also to have a secondary agenda of acknowledging the legitimacy of humanism throughout this century and thereby repudiating those who would or did dismiss it. 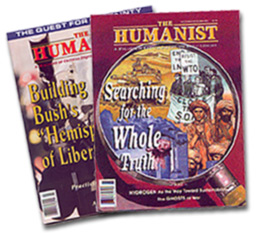 In 1933, the United States continued to be in the depths of the Great Depression. Franklin Roosevelt had just taken office (March 1933), so the New Deal had not yet arrived. The effects of economic disparity were evident everywhere, and fascism was rising rapidly in Europe. There were several generations who remembered clearly the pain and horror of World War 1. Socialism, in its theory and as it was being practiced in the Soviet Union, still held for many great promise as a potential (and legitimate) way to address economic disparity. Science, the scientific method, and their offspring—technology—were changing forever the agrarian foundation of the United States. What’s more, this triumvirate had provoked a kind of hopefulness for bettering the world out of all proportion to its fallibility as a human system. For humanists at that time, science seems to have been sacrosanct.

By the 1930s, religious (or naturalistic) humanism had developed within and without liberal religions—in particular, Unitarianism—so that the time seemed right for a number of its advocates to write and publish a manifesto that would capture the essentials of this religion or philosophy. Their desire to promote and advance humanism should not be ignored. While publicity may not have been the preoccupation in 1933 as it would no doubt be today, the idea of promotion was still there. In 1933, the natural vehicle for such promotion was The New Humanist, a bimonthly magazine published in Chicago, a hotbed for humanism in the early part of this century.

The project was initiated by Raymond Bragg, one of the leading young Chicago-based Unitarian advocates of humanism, who enlisted an author for the first draft as well as a small editorial committee, which included Edwin H. Wilson, another of those young Unitarian movers and shakers of religious humanism.

While Unitarianism was not the only source for the growth of humanism, it was central. Given that Ed Wilson was an ordained and practicing Unitarian minister, it is from this perspective that he wrote The Genesis of a Manifesto. That fifteen of the thirty-four men who signed the manifesto in 1933 were Unitarians poses a difficulty for any who might dispute the importance of Unitarianism in the development of the humanist movement.

— From the Humanist Press