Edward Everett (1794-1865) was President of Harvard University from February 5, 1846, to February 1, 1849. He was also a Unitarian clergyman, teacher, statesman, and a renowned American orator. 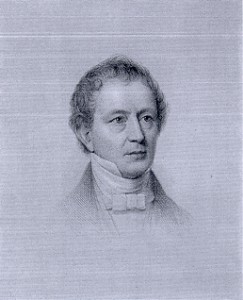 Edward Everett was born to the Reverend Oliver Everett and Lucy (Hill) Everett on April 11, 1794. As a boy, Everett read extensively in his father’s large library, reading the works of Shakespeare, Hume, Tillotson, and Shaftesbury before he was 8 years old. In 1804, Everett attended the Webster School and was taught by Daniel Webster. Everett was to maintain a personal and professional relationship with Webster for the rest of his life. From 1805 to 1807 Everett went to the Boston Latin School and the Phillips Exeter Academy. As a young student, Everett earned several medals for outstanding scholarship.

In 1807, Everett entered Harvard University at the age of thirteen, the youngest member of his class. During his college years, Everett was acknowledged by peers and faculty as a serious scholar. He spent his student years as a tutor giving Latin instruction (1812-1814), studying theology and foreign languages, and writing for student publications. After graduation (A.B. 1811, A.M. 1814), Everett followed in his father’s footsteps and became the pastor of the Brattle Street Church. He was quickly recognized as a powerful speaker and orator, but Everett soon abandoned the ministry for a teaching position at Harvard University. Later in life, Everett admitted that he had accepted the Brattle Street ministry at too early an age and without enough life experience to minister properly to his congregation.

Everett’s teaching arrangement with Harvard University was unique. He was allowed to travel and study in Europe for two years, at full salary, before accepting his new duties. Everett studied 12 to 14 hours a day at the University of Göttingen in Germany. He became well-read in Greek, Latin, French, German, and Italian. He explored Roman law and archaeology, and studied Cicero, Plato, and Greek art. Everett traveled to England and France, bought books for Thomas Jefferson, and became the first American to receive a German Ph.D.

Everett hoped to bring the fruits of German scholarship to Harvard University as a Professor of Greek Literature (1819-1825). Everett, however, was not as successful as he had envisioned and found himself very unhappy drilling college boys in the uses of grammar. Consequently, Everett resigned his professorship after only five years and decided to pursue a new interest that he had begun to cultivate, politics.

Everett’s political career began when he was elected to the United States Congress from Massachusetts in 1825. For the next ten years, Everett served the interests of the conservative wing of the Whig party, favoring the propertied classes and supporting a well-ordered and secure state. In Congress, Everett became a noted speaker and emphasized the virtues of a republican form of government and a strong union for citizens of the new nation. Serving at a time when slavery was becoming an increasingly polarizing issue in national politics, Everett showed a deference to Southern interests. Although opposed to slavery, he recognized the political situation that prompted its recognition and believed that any premature attempts to abolish it would lead to war and disunion.

Everett returned to Massachusetts in 1836 and was elected to the governorship. During his three years of service, Everett made a significant contribution to educational reform. Believing that progress could only be achieved in society if the moral and cognitive capacities of the citizenry could be developed, Everett wanted to turn Massachusetts into a laboratory for public education. Among Everett’s most important accomplishments was the creation of a state board of education to monitor schools and to encourage sound instructional practices. In addition, he supported the creation of normal schools to help train teachers, and he signed a law mandating three months of day school for all children under the age of fifteen years old.

Everett assumed the presidency of Harvard University reluctantly and viewed the position as an opportunity to fill his time before reentering politics. Moreover, because he did not want to take time away from his writing and studies, he shied away from his administrative responsibilities.

Everett continually complained about the poor state of the school that he inherited from his predecessor. Attendance and student behavior in chapel were poor, student disruptions were endemic, drunkenness was commonplace, bonfires and the appearance of prostitutes in the Yard were a regular occurrence, and the buildings were in need of repair. Everett was bothered by student pranks and felt ill-prepared to deal with immature students and confrontational faculty members. He was named “Old Granny” by the students, hung in effigy in the Yard and found offensive graffiti on the fence outside his home.

Although Everett’s short administration was difficult and personally unsatisfying, under his tenure the Lawrence Scientific School was opened. Under the direction of Louis Agassiz, it became the center of post-graduate study and research in the sciences. Furthermore, Everett was successful in enclosing sections of the Yard, increasing the school’s endowment, codifying the duties of University librarians for the first time, and completing a thorough revision of the college laws.

Finding the duties and responsibilities of the presidency a burden, Everett resigned the presidency in 1849 when the Whig party returned to power in Washington D.C., and he resumed his political career.

A Return to Politics

In 1850, Everett came to the aid of his friend, Secretary of State Daniel Webster. He drafted a letter to the Austrian Chargé d’Affaires in Washington D.C. defending the presence of an American agent to report on the revolution in Hungary. Everett’s letter became an important statement of American foreign policy, asserting the right of the United States to extend sympathy to another nation struggling to achieve a popular government. After the death of Webster in 1852, Everett was appointed Secretary of State. Although he served only one year, Everett gained momentary fame when he rejected French overtures to guarantee Spanish sovereignty over the island of Cuba and asserted American interests. He also dispatched Commodore Matthew C. Perry to Japan and settled a dispute with Peru over the Lobos Islands.

Everett returned to electoral politics in 1853 when he was elected to the United States Senate from Massachusetts. His return to office, however, was short-lived and disappointing. He angered anti-slavery supporters by his failing to vote when the Kansas-Nebraska Act came before the Senate. The Kansas-Nebraska Act was Stephen A. Douglas’s proposal to open up Kansas and Nebraska to slavery if the residents in those areas voted for it. Everett revealed that he was ill at the time the vote came before the Congress, but his timidity in the face of the growing anti-slavery controversy and his desire to compromise at all costs to save the Union led to his resignation. 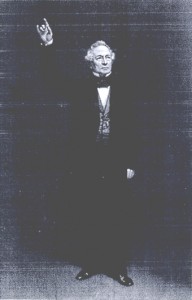 Free from political pursuits, Everett spent the last years of his life traveling the country and promoting the cause of the Union. In 1858, Everett embarked on a campaign to raise funds for the preservation of George Washington’s home, Mount Vernon. He traveled to the country delivering a lecture about Washington’s character and promoting Washington’s role in the establishment of the Union. Encouraging his listeners to preserve the Union in the highly charged times in which they lived, Everett spoke 129 times and ultimately turned over $69,064 to the Mount Vernon Ladies Association of the Union.

When the Civil War began, Everett was a strong supporter of the Union cause. He traveled the North giving numerous speeches and lectures, calling on his listeners to support the war effort. Sometimes Everett spoke twice or more a week. As the most prominent orator of his day, Everett was invited to give the keynote address at the dedication of a national cemetery after the Battle of Gettysburg in November 1863. In his address, Everett connected the heroic struggle for freedom in the classical and modern worlds with the valor and sacrifice demonstrated on America’s battlefields. He justified the Union cause and predicted that the North and South would eventually reconcile, leading to a restored and stronger Union. Everett’s speech lasted two hours, but was eclipsed in history by President Lincoln’s three minute, 272-word address.

Everett was a strong supporter of Abraham Lincoln and traveled the country speaking in support of the Union cause in hundreds of venues. In 1864, at the climax of the presidential campaign, Everett was honored at Faneuil Hall in Boston by thousands of people for his efforts. At this event, Everett made his last public address.

Worn out by his activities and travel, Everett’s health began to fail and he died on January 15, 1865, of pneumonia.

After Everett’s death, the church bells throughout Boston were sounded in his honor. He was remembered as a productive scholar and a spirited public servant and citizen. Known at home and abroad for his intellectual brilliance and abilities, Everett became a champion of public education, of the creation of lyceums, literary societies, scientific associations, and of self-instruction. Serving as a chairman of the Board of Trustees for the Boston Public Library until his death, Everett was a central figure in the Library’s establishment. He belonged to several historical and philosophical societies and received many honorary degrees. Finally, Everett’s dramatic sense, use of graceful language, and personal magnetism, along with his passionate defense of the Union cause during the Civil War, made him one of the most famous of America’s orators.

The day before he wrote this letter, President Lincoln and Edward Everett had shared the speakers’ platform during the dedication of the soldiers’ cemetery in Gettysburg, Pennsylvania. Lincoln was responding to Everett’s note which praised him for the “eloquent simplicity and appropriateness” of his remarks. Everett said, “I should be glad, if I could flatter myself that I came as near to the central idea of the occasion, in two hours, as you did in two minutes.”

It’s ironic that the length of these two speeches has been so much discussed since, because the Gettysburg Address is one of Lincoln’s shortest efforts. Prior to his presidency, his political speeches often lasted two to three hours, but he managed to retain the attention of his listeners. For example, the reporter covering his speech in Dover, New Hampshire, on March 2, 1860, said, “Mr. Lincoln spoke nearly two hours and we believe he would have held his audience had he spoken all night.”

Your kind note of to-day is received. In our respective parts yesterday, you could not have been excused to make a short address, nor I a long one. I am pleased to know that, in your judgment, the little I did say was not entirely a failure. Of course I knew Mr. Everett would not fail; and yet, while the whole discourse was eminently satisfactory, and will be of great value, there were passages in it which transcended my expectation. The point made against the theory of the general government being only an agency, whose principals are the States, was new to me, and, as I think, is one of the best arguments for national supremacy. The tribute to our noble women for their angel-ministering to the suffering soldiers, surpasses, in its way, as do the subjects of it, whatever has gone before.

Our sick boy, for whom you kindly inquire, we hope is past the worst. Your Obt. Servt.