Edward Collins Bursk, born in Lancaster, PA in 1907, graduated from Amherst College (AB 1928) and Harvard (MA 1929) intending to spend a lifetime teaching Latin and Greek. His first teaching position was at Dartmouth College (1931-1933), but the Depression caused him to return to Lancaster to take over as President and General Manager of J. H. Bursk & Company, a family firm which distributed sugar. He returned to teaching in 1941 at Franklin & Marshall College and moved to Harvard Business School in 1942 as an instructor. He was promoted to assistant professor (1943) and associate professor (1946) and became full professor in 1954.

ECB joined the HBR staff in 1943 as Managing Editor and took the position as Editor in 1947 and retained the position until 1971. In addition, he edited and co-edited a number of books including Getting Things Done in Business (1953); The World of Business; How to Increase Executive Effectiveness (1954); Human Relations for Management (1957); The Management Team (1955); Business and Religion (1959). In 1964 he appeared as moderator in an eight-part television series jointly sponsored by Harvard and WGBH entitled “Marketing in the News.” ECB was a highly active consultant, speaker, and board member during his career at HBS. Married and the father of three sons (Edward, Jr., John and Christopher), ECB lived in Cohasset, MA and became professor emeritus in 1978.

AN “OUR BUSINESS” NEWSLETTER STORY

Shortly after Mr. Bursk had authored an article on “low pressure selling,” the Vice President in charge of sales for a leading life insurance company asked him to listen to, and criticize, a sales presentation developed by the company. The idea was to have one of the company’s better salesmen call upon Mr. Bursk — not knowing that he was anything other than a normal prospect.

Mr. Bursk protested that he would not be able to react as a normal prospect since he had just purchased a new policy he could not afford, and therefore was not conceivably in the market for more insurance. After considerable persuasion, he finally agreed to submit himself to the interview, and to analyze it for “low pressure” effectiveness. 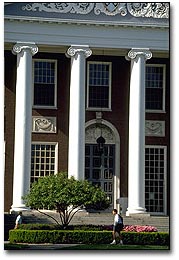 Mr. Bursk reports that the salesman’s approach followed the tried and tested formula of “let us analyze your insurance in terms of estate planning. If you need any further or different coverage, of course, we’ll be glad to provide it; but if you don’t, we’ll still be glad to have done this for you.”

Here are Mr. Bursk’s own words used to describe the interview: “I was called on, I listened, and I ended up by doubling the amount of insurance I was carrying!”

When Edward Bursk died in 1990, a memorial service was held at the First Parish Unitarian Church in Cohasset, Massachusetts, where he was long active and earlier served as moderator. The following words were published in The Boston Globe.

Edward Collins Bursk, editor of Harvard Business Review from 1946 to 1972 and professor emeritus of marketing at the Harvard Business School, died Monday at his home in Cohasset. He was 82.

The monthly publication broadened its coverage during Mr. Bursk’s tenure and increased its circulation from 2,000 to 150,000. He retired in 1989 after 47 years as a professor at the school.
Covers of the Harvard Business Review, where Bursk was editor

A member of the Council of Economic Advisers during the Kennedy administration, Mr. Bursk was an advocate of international competitive cooperation. In 1958, he founded the International Marketing Institute of Boston, which trains foreign businessmen, and became its educational director.

Mr. Bursk wrote “Text and Cases in Marketing; a Scientific Approach” (1968) and “Modern Marketing Strategy” (1972). He was a coeditor of the four-volume “World of Business” (1964), a collection of writings dating to biblical times.

Born in Lancaster, Pa., he graduated from Mercersburg (Pa.) Academy in 1924 and Amherst College in 1928. He received a master’s degree in Greek and Latin at Harvard University in 1929.

After teaching these languages at Dartmouth College, in 1933 he became president and general manager of J. H. Bursk & Son of Lancaster, a wholesale distributor of sugar.

Mr. Bursk was honored in 1966 by the American Marketing Association. After retiring from the business review, he published the monthly Advanced Management Newsletter.

During the 1960s he served as chairman of Browne & Nichols School of Cambridge and as moderator of the “Marketing on the Move” series on WGBH-TV (Channel 2).
Mr. Bursk was a member of the Cohasset Golf Club and the Badminton & Tennis Club of Boston.
He and his wife have three sons, Edward C., John H., and Christopher.

HAS BUSINESS DEVELOPED A CONSCIENCE?

In 1959 Edward Bursk edited a book, Business and Religion, which was a collection of articles that originally based on articles which originally appeared in the Harvard Business Review. These articles were written by such authors as Reinhold Niebuhr, theologian; Raphael Demos, philosopher; Kenneth Boulding, economist; O. A. Ohmann, Standard Oil Company; and Abram Collier, John Hancock Mutual Life Insurance Company.

In the introduction to this book, EB respectfully poses a series of questions: 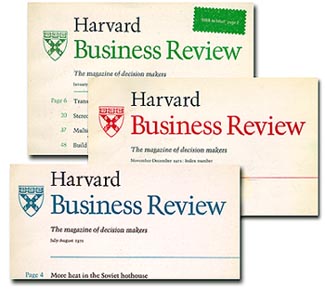 Covers of the Harvard Business Review, where Bursk was editor.

Have businessmen, perhaps aided by the fact that today they are more managers than owners and therefore have more stake in stability than in immediate profits, simply adopted the long-run view in which moral dealings pay off?

Is there a dividing line between a code of good conduct and a credo of religion — and why do businessmen like to find practical reasons for doing unselfish acts?

Why do businessmen value the dignity of man as something more than a deluxe combination of chemicals and electricity, whether oneself or others?