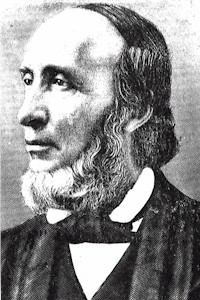 Known primarily for his authorship of the Christmas carol, “It Came Upon the Midnight Clear,” Sears was also a pacifist and Biblical critic. He was born in Sandisfield, Massachusetts  on April 6, 1810 into a farming family. As a boy he worked the farm, attended village schools, and also Westfield Academy. He graduated from Union College, and then went on to Harvard Divinity School, where he finished in 1837. Briefly he preached in the West, but then was ordained and installed as minister in Wayland, Massachusetts in 1839. He also married Ellen Bacon that same year. After a short ministry, he moved on to Lancaster, Massachusetts in 1840, where he served for seven years. His work at this larger parish, which included the introduction of the first “church socials,” exhausted him. Here he found his duties “extended and various.” He returned to Wayland for recuperation following a nervous breakdown. It was during this period that he wrote, “It Came Upon the Midnight Clear.” The power of his ministry was found in the poetic expressions of the spiritual life, so that his sermons were often compared to prayers. In all he wrote some 500 hymns, including another Christmas favorite, “Calm on the List’ning Ear of Night.” The more rural parish in Wayland proved to his liking, when he again began to serve the year following his return to town. He continued in this pastorate for 17 years. This contemplative and retiring soul, who had difficulty speaking before crowds, had facets to his personality beyond quiet meditation.

Sears’ great carol, “It Came Upon the Midnight Clear,” may have been composed at a friend’s request to be performed at a Sunday School in Quincy, Massachusetts. Also known as “The Angel’s Song,” it has a powerful anti-war message. Sears was a pacifist who felt great contempt for the Mexican War, and the call for peace underscores this carol. His social conscience led him to advocate abolitionism as well. From 1859 to 1871 Sears played an editorial role with Rufus Ellis in the Monthly Religious Magazine. In 1866 he was called to the parish in Weston, Massachusetts, where he served until his death on January 16, 1876. His religious orientation was more evangelical and mystical than most of his colleagues, as shown by his interest in the Gospel of John. Well versed in current Biblical criticism, his more Christocentric approach is evident in the title of his most scholarly work, The Fourth Gospel, the Heart of Christ.