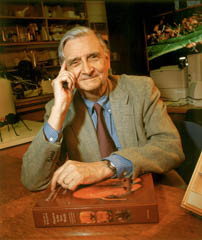 It was an article in National Geographic (“Stalking Ants, Savage and Civilized”) that launched, at the ripe age of 9, one of the greatest scientific careers of the late 20th century, a career that began in entomology with a particular passion for ants, but that has since reinvented itself with remarkable frequency, expanding its scope to encompass not just the earth’s smallest creatures, but the whole living planet.

E. O. Wilson’s contributions began early. He was 13 when he discovered, in a vacant lot near the docks of Mobile, Alabama, the first known U.S. colonies of fire ants, Solenopsis invicta, invaders from Brazil and Argentina known in the South as “the ants from hell.”

As an assistant professor at Harvard in the late 1950s, and fascinated by ant societies, he began seeing parallels in the social interaction of birds, lions, monkeys, apes and even humans. In a 1975 book audaciously titled Sociobiology: The New Synthesis, he charted in evolutionary terms the social architecture of a wide range of species—their breeding behavior, gender dominance, caste systems.

Wilson’s Sociobiology was at once enormously influential and hugely controversial. Its first 26 chapters, which dealt with the social systems of nonhuman species, were widely praised as one of the century’s signal scientific achievements. Its 27th chapter, which applied the same analysis to human behavior and culture, was harshly, and sometimes violently, attacked. At a 1978 meeting of the American Association for the Advancement of Science, an impassioned dissenter emptied a pitcher of ice water on him. Despite the mixed reaction, Wilson in this and subsequent books, culminating with Promethean Fire (1983) accomplished something few scientists can claim: he established a new field of science. It is known to this day as sociobiology.

By that time, however, Wilson had moved on. Drawing from his deep knowledge of the earth’s “little creatures” and his sense that their contribution to the planet’s ecology is under-appreciated, he produced what may be his most important book, The Diversity of Life (1992). In 424 pages he describes how an intricately interconnected natural system is threatened by a man-made biodiversity crisis he calls the “sixth extinction”—the most devastating trauma since the extinction event that laid waste the dinosaurs and other creatures 65 million years ago.

He notes in Diversity that the 1.5 million species named so far by scientists represent only a tiny fraction of the tens of millions that may be out there. Wilson’s prediction that 30 to 50 percent of all species would be extinct by the middle of the 21st century was meant to provoke, and it did. Critics rejected the estimate as another one of his flamboyant speculations. But subsequent research has supported it. From the perspective of the biodiversity scientist, virtually all the signs are bad.

How can human society transform itself? How can we become stewards of the living world?