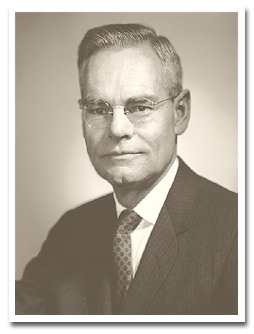 Duncan Howlett was born May 15, 1906, in Newton, Massachusetts. He received the SB. degree from Harvard in 1928, the LLB. Degree in 1931, and in the same year he was admitted to the Massachusetts Bar. Following the practice of law for two years, in 1933 he yielded to a lifelong interest in religion and returned to Harvard where he was awarded the STB degree with honors in 1936, while serving as Minister of the Second Church, Unitarian, in Salem, Massachusetts. Dr. Howlett was ordained to the Unitarian ministry in Salem, Massachusetts, November 17,1935. Howlett was at that church from 1933 to 1938. From there he went to the First Unitarian Church, New Bedford, Massachusetts (1938-1946). In September of 1946 he became Minister of the First Church in Boston, Unitarian, a position he held for the next twelve years. In 1958, he was called to All Souls Church, Unitarian, in Washington, D.C., the position from which he retired in 1968. In May of that year he was appointed to Hubert Humphrey’s presidential campaign staff. 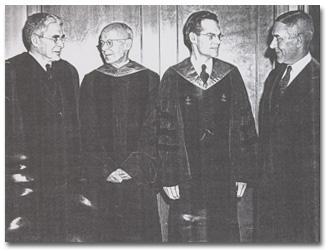 Participants in the November 1946 installation of Rev. Duncan Howlett as minister of the First Church in Boston included, from left to right: Rev. Frederick May Eliot, president of the American Unitarian Association; Rev Charles E. Park, minister emeritus of the church; Rev. Howlett, and Charles Rugg; chairman of the standing committee. Courtesy of the Boston Public Library Print Department.

In addition to his concern with public affairs during the entire range of his ministry, Howlett played an active role in Unitarian denominational affairs. Among the various committees and boards on which he served were those of the Beacon Press, the Historical Library, and the Christian Register. He was President of the Unitarian Historical Society, Chairman of Commission I, “The Church and Its Leadership”; Chairman of the Washington Advisory Committee of the Unitarian Universalist Association Department of Social Responsibility; member of Harvard University Overseer’s Committee to visit the Divinity School (1940-62); Chairman, D.C. Advisory Committee to the U.S. Commission on Civil Rights; and member of the D.C. Commissioners’ Crime Council; Executive Committee of the Washington Home Rule Commission; and the Washington Urban Institute.

Duncan Howlett has written the following titles: Man Against the Church; The Struggle Between Religion and Ecclesiasticism (1954); The Essenes and Christianity; An Interpretation of the Dead Sea Scrolls (1957); The Fourth American Faith (1964); No Greater Love: The James Reeb Story (1966); The Critical Way in Religion (1980); and The Fatal Flaw at the Heart of Religious Liberalism (1995).

On retiring from the active parish ministry in 1968, Howlett became deeply involved in the environmental movement, particularly in the area of forestry. In Maine he organized and was the first President of the Small Woodland Owners Association, popularly known as SWOAM. The conservation of natural resources emphasizing the responsible management of woodland on the part of citizen forest owners became for him a “second career.” The continuing search for “truth” has motivated Dr. Howlett throughout his life, truth that is lived out in human experience. Moulton Library is indeed fortunate to receive his gift of books and papers. 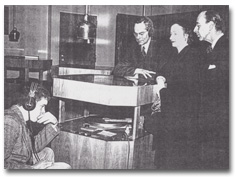 Howlett, during his 25th reunion, listening to a recording of Robert Frost poems at Harvard’s Lamont Library with his wife, a Harvard freshman, and a fellow member of the class of ’28. Courtesy of the Boston Public Library Print Department.

During the last decade, virtually all my activities have been connected with my work as a minister. In New Bedford, I served on seemingly endless committees and boards, and held various offices, among them the presidency of the local Harvard Club. The same thing has been true in the Unitarian denomination, where my most conspicuous post is hairman of the Commission on Planning and Review, a unit intended to shape long-range policies. In 1946, I became minister of the First Church in Boston.

My chief connection with Harvard during these years, apart from recurrent chapel services, and some lectures, has been service on the Overseers Committee to Visit the Divinity School. We were able to persuade the Corporation to appoint a commission to make a survey of theological education in America, with especial reference to Harvard. Their report is now in, and we hope for great things from it.

Hewlett’s 50th Anniversary Report
to the Harvard Class of 1928 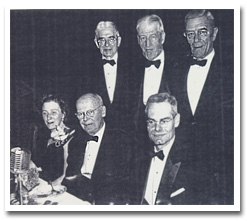 The ministers of the churches of Boston’s Back Bay neighborhood. Left-Right, Rev. Howlett; Rev. William H Denney, minister of the Church of the Covenant; and Rev. Robert B. Day, director fo the Benevolent Fraternity of Unitarian Churches. Courtesy Boston Public Library Print Department.

The Unitarian Universalist Yearbook lists me as officially retired. Happily, the designation is accurate in the technical sense only. I resigned as Minister of All Souls Church in Washington, D.C. in 1968 and soon after we moved to Maine. But it was not retirement that awaited us there. Carolyn, as President of the International Association of Liberal Religious Women, was soon making frequent trips to Europe and I found myself in a new and demanding enterprise, trying to manage the forest land adjacent to our former summer place now our permanent home.

It proved to be no small undertaking. Extensive reading and the assistance of a first-rate consulting forester proved insufficient; and in September 1971 I enrolled as a special student at the School of Forest Resources at the University of Maine in Orono. Taking the courses for credit, right along with the regular students as I insisted on doing, was a harrowing experience, especially before the midterm exams. With those hurdles cleared, however, forestry school became an enjoyable as well as a very profitable experience. The academic approach provided the basics in an unfamiliar discipline; and the school, faculty and students alike, introduced me to a new circle of friends and acquaintances in my new avocation.

At about this time, the small woodland owner was becoming a concern of industry, education and government alike. There are a great many of us, nationwide, and we own forest land which in the aggregate is an immense potential source of logs and wood fiber. Out of my own interests and needs I was inevitably drawn into this area of specialization.

Two and a half years ago we organized the Small Woodland Owners Association of Maine. As a nonprofit organization, it has grown steadily without promotion because it fills a need. By the members’ own decision, we are primarily a teaching organization. Our meetings are designed to help the owner learn how to manage his woodlot; and because many of us do our own work, to give the owner the information he needs about machinery and its proper use. 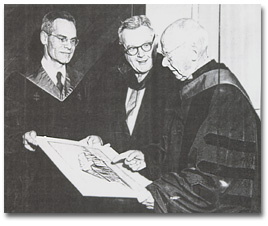 The 325th Anniversary of the founding of the First Church in Boston was observed in 1955. Examining a picture of the original church, a mud and thatched-roof building, are, left-right, the Rev. Duncan Howlett, minister; Prof. Perry Miller of Harvard, and the Rev. Charles E. Park, minister emeritus. Courtesy of the Boston Public Library Print Department.

How does all of this relate to my former very intensive life as a minister? At first I would have said: Not at all. But now it is clear that my professional life has been helpful in at least two ways: first in speaking and writing on forestry, of which I do quite a little; and second, in participating in forestry and conservation organizations of which I do even more. A lifetime of experience with that peculiarly American institution, the voluntary organization, has been of great help. As the minister of congregationally organized churches, as a participant in denominational activities at nearly all levels, and as a participant in many and varied non-ecclesiastical voluntary organizations, I seem to have learned something about how such things are organized and run. I have learned, for example, how Roberts Rules of Order can be used to implement the will of the majority. I have also learned how to prevent the subversion of those rules to the purposes of a willful minority.

To sum up, after a deeply satisfying and often exciting professional life as a minister, I have been surprised to find similar subjective qualities in my retirement avocation. Organizational activities and physical work out of doors in my own woodland have provided true re-creation from a continuous program of study and writing which I follow for several hours almost every morning. The result is a book of some proportions titled The Critical Way in Religion which should see publication by next spring.

All in all life has brought me great joy and satisfaction. I have known anxiety, frustration and tragedy, but I have also known gladness and exultation. Nothing has meant more to me than the genuinely happy marriage Carolyn and I have enjoyed, the equally happy marriages of our four children, the promise our grandchildren show in the area of the values we cherish, and the genuinely warm set of relationships that flow in so many directions within the family circle. C. S. Lewis once wrote a book entitled Surprised by Joy. So also could I. But I would add the dimension of gratitude for it all. 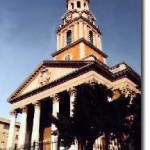 All Souls Church in Washington, D.C. 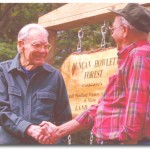 The dedication of the Duncan Howlett Forest, created from land owned by Maine Tree Farmers. Photo by Lars Howlett. 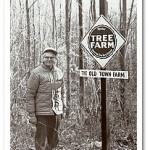