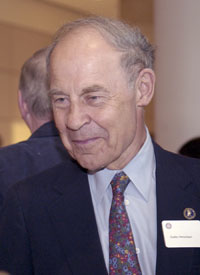 I was born in San Jose, California, on June 18, 1932, the first of six children of Robert and Dorothy Herschbach. My father was then a building contractor and later a rabbit breeder. When I attended Campbell High School, I took all the science and mathematics courses offered. Chemistry I found at first puzzling and then most intriguing. At that time, I was at least as interested in football and other sports; perhaps that presaged my later pursuit of molecular collisions.

I entered Stanford University in 1950 and found a new world. My graduate study continued at Harvard, where I again found an exhilarating academic environment. I received the Ph.D. in Chemical Physics in 1958. I returned to Harvard in 1963 as Professor of Chemistry.

Other biographical items pertaining to Harvard include my appointment in 1976 as Frank B. Baird, Jr. Professor of Science; service as Chairman of the Chemical Physics program (1964-1977) and the Chemistry Department (1977-1986), as a member of the Faculty Council (1980-1983), and as Co-Master with my wife of Currier House (1981-1986). At Currier we were in effect reincarnated as undergraduates to preside over an extremely lively community of 400 students and tutors. Typical of many memorable episodes was the night we were summoned to a student’s room to meet a seal in the bathtub. My teaching includes graduate courses in quantum mechanics, chemical kinetics, molecular spectroscopy, and collision theory. In recent years I have given undergraduate courses in physical chemistry and especially general chemistry for freshmen, my most challenging assignment.

An Inconvenient Truth: The Planetary Emergency of Global Warming and What We Can Do About It by Al Gore (2006)