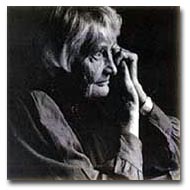 Dorothy Livesay, it is generally agreed, was one of the foremost Canadian poets of her generation. She was born in Winnipeg on 12 October 1909, during the first snowstorm of the season — a fact that she herself considered symbolic of her identity:

Reared on snow she was
Manacled on ice

and it was strangely fitting that she died also, on 29 December 1996, during one of the rare snowstorms in Victoria, B.C.

Her parents, J.F.B. Livesay and Florence Hamilton Randal, were both writers, having met while working for the Winnipeg Telegram. They fostered Dorothy’s literary interests from an early age, although it was not until much later that she discovered that her mother had written published poems. It was her mother who came upon a poem Dorothy had written at the age of 13 and took it upon herself to submit it to a newspaper for publication. Dorothy’s anger at having what she considered private material thus invaded was tempered by the check for two dollars that she received in payment.

By this time the family had moved to Toronto, where she went to a private school and subsequently to the University of Toronto, where she studied modern languages. At the age of 19 her first volume of poetry, a slim collection entitled Green Pitcher, was published. She decided to spend her third year as a student at the University of Aix-Marseilles, where she continued to write. Returning to Toronto for her fourth year, she found herself in a circle that was responding in a radical way to the effects of the deepening Great Depression. But it was during her year of graduate work at the Sorbonne in Paris (1931-32) that the economic effects of the Depression and the rise of Fascism affected Dorothy so strongly that she became a theoretical Marxist and then an active Communist.

Dorothy carried this political commitment back with her to Toronto, where she enrolled in the School of Social Work as a means of carrying her activism into practice. For the fieldwork that comprised the second year of her course, she was accepted by the Family Service Bureau in Montreal, where she was directly exposed to the poverty and misery of the unemployed in a city experiencing the worst effects of the Depression. Her concern for the plight of women, in particular, spurred the development of the strongly feminist emphasis that became a feature of her writing. But her literary output during this period was strongly ideological, which perceptibly affected its quality.

Dorothy’s first job after graduation was with a recreational agency in Englewood, New Jersey, where she was exposed to the full impact of what life was like in the black ghettoes. Her health gave way, and she returned to Toronto, where, after a period of recuperation, she found a congenial position in 1936 as a director of and contributor to a newly founded left-wing journal, New Frontier, which rapidly became more and more completely a mouthpiece for the Communist Party. Later that year she moved to Vancouver as the paper’s western editor, a position which she combined with social work and political activity. 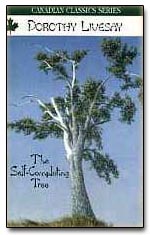 She had not been in Vancouver long when she met Duncan MacNair, who had travelled widely after leaving his native Scotland, and in August 1937 the two were married. Their relationship was to a considerable extent complementary, though also tempestuous at times. After two children were born, Peter in 1940 and Marcia in 1942, Dorothy adjusted her priorities to her family responsibilities. Her literary output continued, though at a reduced level, and she became part of a small circle which successfully launched a new Canadian poetry magazine called Contemporary Verse. But by now she was becoming disenchanted with the Communist Party, though she had not lost her deep concern for the victims of the current economic order. Looking back on these developments from a later perspective, she wrote: “I learned a great deal about communist tactics of penetration and camouflage; but I was too committed to be shocked. It was only years later that the false actions and fractional tactics were revealed to me in their true light. This did not cause me to hate the Communists, or to Red-bait; rather, I was disgusted with myself for having been so duped. But I believe I let myself be duped because no one else except the Communists seemed to be concerned about the plight of our people, nor to be aware of the threat of Hitler and war. These things they saw clearly and they did extend brotherhood to the down-and-out. Certainly the communist predictions of capitalist depression followed by fascism and war were deadly accurate!”

It was during the mid-forties that Duncan and Dorothy discovered the Unitarian Church. For a long while Duncan had been a Theosophist, and at that time there were a number of people who were both Theosophists and Unitarians. Dorothy’s religious upbringing had been conventional. As she herself described it in a sermon delivered in the Unitarian Church of Vancouver in 1956:

I was brought up in an orthodox religious atmosphere. My mother’s Church of England views dominated my early years. I paid little attention to the fact that my father was a heretic and sceptic—himself an escapee from the Plymouth Brethren. However, after steadfast attendance at church and Sunday school, at 15 years old I startled my teacher by questioning certain articles of Anglican dogma… Later, at university I found a very free spirit of enquiry into the historical origins of Judaism and Christianity. Perhaps this made it all the easier for me to repudiate orthodox religion, and eventually to accept as a substitute the deterministic, Marxist view of the origin of man. The paradox continued however, for at the same time that I was embracing economic determinism and naturalism, I was also taking delight in a study of the seventeenth-century poets—all of whom were writing not in praise of man, but for the greater glory of God! 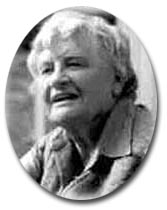 Her wrestling with such paradoxes did not end with her membership in the Unitarian Church. Looking back at a later date, she said, “I missed there the sense of the mysteriousness of life,” and in that same sermon she criticized the common tendency among Unitarians of that period to adopt a completely rationalistic and humanistic stance, saying, “Instead of ignoring the possibility of an outside power as the source of creativity in man, we should rather be making a study of these matters. The deterministic concept, I feel, does not go far enough. It ignores vast areas of human experience which cannot be ignored: I mean the areas of intuition, creativity and mysticism.” She went on to illustrate what she meant by extensive quotation from the poets: Vaughan, Donne, Blake, Whittier, Dickinson and Hopkins. The answer for them, as for her, was to be found in poetic insight. She noted in her journal, “I feel that the beauty of the natural world and the artist’s or poet’s revelation of it does lead to inner harmony—peace—truth. The Gothic cathedrals do lift us out of time.”

Dorothy and Duncan continued to live in Vancouver until 1958. She did some school and university teaching during this time, but her literary output remained fairly slight. Then, as her children grew older, she felt free to apply for a Canada Council fellowship to study the teaching of English at London University’s School of Education. This turned out to mark a new point of departure in her life. The following February she received the news that Duncan had died of a massive stroke, and returned briefly to Vancouver. But she was soon back in London, then for brief period in Paris, working for UNESCO. Later the same year she succeeded in obtaining a position on the staff of a teachers’ training college in what was then Northern Rhodesia but became the independent nation of Zambia while she was there. Her political and social concern involved the mistreatment of children and also the need for improved health and dietary standards. “I can do very little about all this, although I can put some of it into poems.”

In 1975 she once again was instrumental in founding a poetry magazine, CV/II, the title harking back to the Contemporary Verse of the 1940s. It became an important addition to the Canadian literary scene.

The honours which came Dorothy Livesay’s way in later life culminated in her being named an officer of the Order of Canada in 1987.

Her later years were spent mostly in rural retreats. At first she divided her time between a cottage on British Columbia’s Galiano Island and one on Lake Winnipeg; then she moved into a seniors’ complex on Galiano Island. Finally, when this degree of isolation became increasingly difficult to handle, she moved to Victoria, where in her last years she was a regular participant in the life of the Unitarian congregation.

The remarkable succession of changes through which her life moved illustrated her own dictum that, “Every decade we become a different person.” Yet there was an essential continuity and consistent line of development. All the way through she exemplifies a sometimes disconcerting degree of honesty and openness, an insistence upon personal integrity, and an encouragement to the rising generation to find their own authentic path in life. Cosmopolitan though her experience was, there could be no mistaking the genuinely Canadian character of her writing both in poetry and prose, which marked her sense of the importance of roots in a particular place.