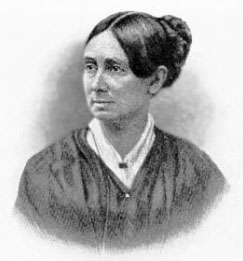 From a daguerrotype about 1840.

Dorothea Lynde Dix was born in Maine, where she taught school before moving to Boston and opening her own school. Her students included the daughters of William Ellery Channing. When Dorothea contracted tuberculosis, her close friend, William Ellery Channing, aided her recuperation, during which time she produced several books for publication.

After recovering her health, she received an inheritance large enough to free her from teaching. She visited a jail where she saw mentally ill women prisoner in dirty, cold cells. Her visits with three Unitarian reformers–Horace Mann, Charles Sumner, and Samuel Gridley Howe–led her to investigate what was happening to ill and imprisoned people in some 500 towns. Her 1843 documentary Memorial to the Massachusetts Legislature awakened relief, which led her to campaign in other states. After visiting state penitentiaries, county jails, and poorhouse in the Midwest, the South, and Canada, she lobbied legislators there and in Washington, D.C. She proposed that federal land-grant of 12,500,000 acres be set aside as a public endowment to benefit the deaf, mute, and insane. The U.S. Senate and House passed her recommendation by two-thirds. President Franklin Pierce vetoed it.

Dorothea was more successful with Queen Victoria and Parliament when she visited Scotland. Next came a year of visits to nations of central Europe. Upon her return home, funds finally began to be allocated for the mentally ill. During the Civil War she was appointed Superintendent of U.S. Army Nurses.