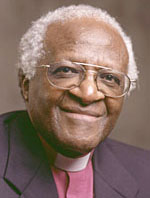 Bishop Desmond Tutu, who won the Nobel Peace Prize in 1984, was born in 1931 in Kierksdorp, Transvaal. His father was a teacher, and he himself was educated at Johannesburg Bantu High School. After leaving school he trained first as a teacher at Pretoria Bantu Normal College and in 1954 he graduated from the University of South Africa. After three years as a high-school teacher, he began to study theology, being ordained as a priest in 1960.

In 1975 he was appointed Dean of St. Mary’s Cathedral in Johannesburg, the first black to hold that position. From 1976 to 1978 he was Bishop of Lesotho, and in 1978 he became the first black General Secretary of the South African Council of Churches. Tutu is an honorary doctor of a number of leading universities in the USA, Britain and Germany.

Desmond Tutu has formulated his objective as “a democratic and just society without racial divisions” and has set forward the following points as minimum demands: 1) equal civil rights for all, 2) the abolition of South Africa’s passport laws, 3) a common system of education, 4) the cessation of forced deportation from South Africa to the so-called “homelands.” The South African Council of Churches is a contact organization for the churches of South Africa and functions as a national committee for the World Council of Churches.

—Courtesy of the Nobel Foundation

God Has a Dream: A Vision of Hope for Our Time by Desmond Tutu.