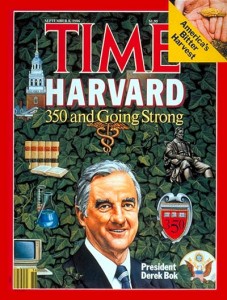 Derek Curtis Bok (born March 22, 1930) is an American lawyer and educator, and the acting president of Harvard University. He was born in Bryn Mawr, Pennsylvania, and graduated from Stanford University (B.A. 1951), Harvard Law School (LL.B. 1954), and George Washington University (A.M. 1958). He taught at Harvard from 1958, where he served as dean of the law school (1968-1971) and then as university president (1971-1991). Bok currently serves as the Faculty Chair at the Hauser Center for Nonprofit Organizations at Harvard and continues to teach at the Harvard Graduate School of Education. He reassumed the presidency of the university on an interim basis after Larry Summers’ resignation took effect on July 1, 2006. He expects to have the job for about a year.

His wife, the sociologist and philosopher Sissela Bok, née Myrdal (daughter of the Swedish economist Gunnar Myrdal and the politician and diplomat Alva Myrdal, both Nobel laureates), is also affiliated with Harvard, where she received her doctorate in 1970. His daughter, Hilary Bok, is a philosophy professor at Johns Hopkins University.

Click here for supplemental reading about Derek Bok on Amazon.