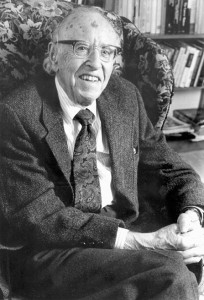 Like several eminent sociologists of his generation, David Riesman was trained in another discipline. After graduation from Harvard College and Harvard Law School near the top of his class, he clerked for Justice Brandeis, worked as an Assistant District Attorney for Thomas E. Dewey of New York, was a contract termination lawyer for Sperry Gyroscope during World War II, and then taught law before turning to sociology.

Nonetheless, he became the most famous sociologist of his generation, and wrote the most widely read book on American society of the twentieth century, The Lonely Crowd (with the collaboration of Nathan Glazer and Reuel Denney), published in 1950 and still in print.

Having become the sociologist whom leaders, journalists, and opinion makers first consulted on trends in American society, and after writing scores of widely read essays on contemporary issues (gathered in Individualism Reconsidered, 1954, and Abundance for What, 1964), Riesman abandoned his role as chief pundit on American society and devoted the rest of his career to American higher education. He became the leading authority on the subject, publishing many important books, often in collaboration with younger colleagues who also became authorities on higher education (Christopher Jencks, Gerald Grant, Judith McLaughlin). He was consulted by the leading figures in higher education, particularly in the wake of the student disorders of the late 1960s. His advice was regularly sought on curricular development and appointments of major university and college presidents.

As a faculty member at the University of Chicago during the 1950s, he taught only undergraduates. He found a more congenial environment in the then inter-disciplinary Department of Social Relations at Harvard, which he joined in 1956 as the first Ford Professor of the Social Sciences. When it broke up, much to his disappointment, he joined the new sociology department, focusing on his celebrated undergraduate course, “American Character and Social Structure.”

His marriage to Evelyn Thompson was long and happy. She was his close collaborator on many of his projects, and co-author of Conversations in Japan (1967), based on one of their rare overseas visits, in which they helped to establish bridges with post-war Japanese intellectuals.

Riesman’s life and work is generally acknowledged as an important part of the intellectual heritage of 20th-century America. The publication of his biography by the historian Wilfred Clay will further corroborate this judgment of an outstanding American life: examined, examining, and in so many ways, exemplary.

Click here for supplemental reading about David Riesman on Amazon.