In 1928 David Rhys Williams left the Third Unitarian Church of Chicago to answer the call of our church. His thirty-year ministry was the longest in our history. He retired in 1958, but served as Minister Emeritus until his death in 1970. David Williams’s ministry here spanned three tumultuous decades of American history—economic depression, world war, cold war, and internal suspicions. Through it all, he was steadfast in his principles, and our church grew under his leadership.

The first major event of Williams’s ministry was the church’s centennial, which was celebrated in March, 1929. American Unitarian Association President Lewis C. Cornish came to Rochester and preached the centennial sermon: “A Century of Increasing Liberalism.” Community religious leaders of all faiths extended greetings to the Unitarian Church, and the centennial was widely publicized in the local press. News stories emphasized the historical importance of our church—its connections with abolitionism and women’s suffrage, and its pioneering social service involvement.

When David Williams was called by our church, he told the trustees: “If there is anything you don’t want me to talk about in the pulpit, let me know about it now, so I can decline the call of this church.” He was not restricted, and he did not hesitate to put into action as our minister his deep belief that social questions were truly religious questions. He once said that a vital function of religion is to “challenge the complacency and inertia of the rest of mankind.”

He had not been in Rochester long before he plunged into controversy. In 1932 he protested from his pulpit the arrest in Rochester of several women who had been distributing pacifist literature. In the same year he protested when the city council, citing depression related financial problems, cut back on appropriations for libraries, schools and museums.

David Williams was twice the target of right-wingers seeking to brand him a Communist. In 1938 he was labeled a Communist by a small group of Rochesterians calling themselves the Rochester Social Justice Club. In this period Williams had been criticizing Father Charles Coughlin’s pro-fascist, anti-Semitic radio talks. Williams answered the charge with a sermon outlining his belief in democracy, parliamentary government, minority rights, and civil liberties. 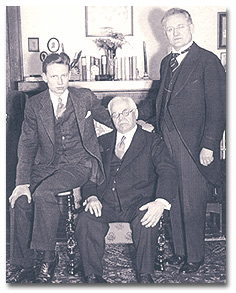 During the McCarthy period (the late 1940s and early 1950s), Williams again came under fire. Around this time, thirteen members of the church accused Williams of being “soft on Communism,” and sought to oust him from our pulpit. Beyond the political issue, there were factors of just plain church politics involved. This faction attempted to sway the opinions of others in the congregation, but when the affair was brought to a vote in a congregational meeting, only the original thirteen voted against Williams. The thirteen subsequently left the church. This incident could have become very difficult, but during that period the board of trustees had excellent leadership which worked hard to maintain church unity.

As often as he found himself under attack, David Williams was also highly respected in the city. In 1945 he was invited by the Rochester Ordnance District to conduct a military memorial service for President Franklin D. Roosevelt, in spite of the fact that Williams had been a registered pacifist since 1917. In 1952 he received the Champion of the Oppressed award from the Unitarian Fellowship for Social Justice. For Williams, personal liberty stood above any other consideration.

Our church moved into the decade of the 1950s with booming growth. Between 1952 and 1956 the number of families on our mailing list doubled to 423. Not only had there been growth, but there had been a change in the character of the membership. Many of the new members were young couples with children. By 1955 plans to enlarge our building were being discussed.

In August of 1955 David Rhys Williams suffered a serious heart attack. He was hospitalized for a month and spent the autumn recuperating. At Christmas he was back in the pulpit, and by February, 1956 he was carrying his full preaching load and launching a new series of sermons.

In 1957 several members organized the Rochester Memorial Society, advocating simple, dignified memorial services rather than the traditional elaborate and ostentatious funeral practices. The Society has grown to a membership of over a thousand families, now a majority from outside our congregation. Our church serves as the Society’s mailing address, and members of the church still provide much of the leadership of the Society.

At Sunday services on January 5, 1958 David Williams announced his planned November retirement. He made the announcement far in advance in order to give the congregation ample time for the selection of a new minister and for a smooth and orderly transition. Williams paid tribute to his wife Lucy and her work for the church saying that she had been virtually his co-pastor for thirty years. David Williams retired on November 2, 1958.

While our congregation was in the midst of selecting candidates for our pulpit, we were struck by another crisis: In April we were approached by planners of the proposed Midtown Plaza Project with an offer to purchase our church property. While the Pulpit Committee deliberated over ministerial candidates, another major committee had to be chosen to consider this offer. One element that had to enter into the decision was the fact that we did need more space. 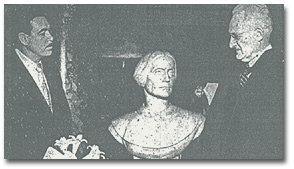 David Williams was especially opposed to selling our buildings. His reasoning summed up the feelings of those who opposed a move. The buildings themselves were important architectural works, and they were important in the history of the city of Rochester. Williams pointed out that at least a dozen institutions or organizations then serving the whole community had been launched under our shelter. He argued against moving from the central city, believing that our location had “obliged us to grapple with civic and social problems at our own doorstep.” He expressed the hope that space could be found in the Plaza Project itself for the church.

A new problem soon arose. Our church building was becoming physically unsafe, shaken by the construction work going on all around it. The contractors offered us an additional sum of money if we would vacate immediately. Dr. Williams urged that demolition be delayed and a careful examination be made to see if the building could be preserved as an urban interfaith Susan B. Anthony Memorial Chapel. On October 1, 1959, as workers removed furnishings and prepared for the demolition, David Williams prayed in the Galilee Porch that had been added to the church only fifteen years before. Through this vigil (which he called a prayer strike) he sought to focus attention on his hope that this landmark would not be destroyed. He spent the day and evening there, and left only at midnight when the church building legally became the property of the construction company.

His vigil got wide newspaper coverage, and the Democrat and Chronicle published a dramatic photograph of “our David” praying in a rather darkened room, with a shaft of sunlight streaming in upon him and his church. He had said on September 27, “To me, this church is no dead pile of stone and timber—but a living thing filled with the voices and the faces of those who have worshipped here over the years.”

On October 4 the church steeple was felled, and the rest of the demolition proceeded. We had to move on.

On March 28, 1970 Minister Emeritus David Rhys Williams died at the age of eighty. There was a kind of irony in the fact that he died on Easter weekend. A signer of the original Humanist Manifesto in 1933, Williams had moved in a different direction in some theological areas in the intervening years. He was interested in studies of the new field of parapsychology, and he held to a belief in an afterlife.

— Adapted from A History of the First Congregational Society of Rochester, New York

Minister Prays For Doomed Church
From the Unitarian Register, January 1960

Williams sits alone in meditation as demolition of the Rochester church begins. Dr. Williams remained in the church from 11 A.M. until midnight to protest its destruction.

In a last-minute attempt to prevent its demolition, Dr. David Rhys Williams, minister emeritus of the First Unitarian Church, Rochester, New York, spent a day in solitary meditation in the deserted building.

The congregation in September voted to sell the church and vacate immediately. It considered the structure, on the lip of a new shopping plaza excavation, a noisy, unsafe meeting place. Under the original agreement with the firm building the plaza, the church was to vacate in 1961.

As reported in the Rochester Democrat and Chronicle, Dr. Williams stated his “prayer strike” was “an eleventh hour move to try to gain support for a project to save the building. I thought I had two years of grace; it turned out that I didn’t.”

Dr. Williams emphasized that his protest was a personal one: “I have only moral force today; I am no longer minister of the church. It is not my function as minister emeritus to intervene in the internal affairs of the church. But in good conscience I cannot let this matter go by…. This is generally regarded by experts as one of the finest specimens of early English Parish Gothic architecture in the United States. It is also the place where Frederick Douglass, the great Negro leader, spoke. It is one of the few remaining early shrines of the women’s suffrage movement. Here Susan B. Anthony worshiped, lectured, conducted classes, and went forth to preach the gospel of women’s suffrage.”

“We must hold the line against cultural deterioration,” he said. “I believe, in view of the protests raised against demolition of this building, its razing is a cultural crime of the first degree.”

The Biography of George Huntston Williams

Williams, David Rhys. World Religions and the Hope for Peace