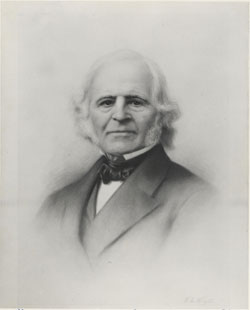 David Reed was born February 6, 1790, at Easton, Mass., of a family which has rendered much valuable service to the church and the Commonwealth. His father was the Rev. William Reed, for many years minister of the town of Easton. David graduated at Brown University in 1810, in the same class with his older brother William. After spending two years in charge of the academy at Bridgewater, he removed in 1813 to Cambridge to continue the theological studies which he had already begun. In 1814 he was licensed to preach; and during the years that followed, in the heat of the Unitarian controversy, was actively engaged in the charge of several parishes. He declined, however, a permanent settlement in order that he might meet the responsibilities for the education of his younger brother which his father’s early death had thrown upon him.

The opportunity which Mr. Reed thus had of becoming acquainted with theological thought in various parts of this country opened his eyes to the necessity of the establishment of a newspaper which should be devoted to the advocacy of liberal Christianity. With the approbation of Drs. Channing and Ware and with the support of other Unitarian friends, in April, 1821, he established such a paper, and gave it the name of the Christian Register.

For more than forty-five years he was the proprietor and during a great deal of that time the responsible editor of that paper, rendering to the Unitarian cause a service of the highest value. He maintained by letter or in person a large acquaintance with Unitarians in all parts of America. In the struggles and moral reforms of the early half of the nineteenth century he committed himself courageously and sagaciously to what was in the beginning the unpopular opinion. He was a man of clear ideas, forcible expression, and pure and unselfish character. He retained to the end his critical interest in men and affairs, and was a perfect example of serene and happy old age and unpretending Christian faith.

Mr. Reed established the Register in a characteristic spirit. His foreword in the first number declares that “it will be admitted that something remains still to be done to increase the purity of Christian faith and to promote its genuine, practical influence upon the heart and life…. The great object of the Christian Register will be to inculcate the principles of rational faith and to promote the practice of genuine piety.” To this task Mr. Reed gave himself with unstinted devotion and with a patient courage that overcame obstacles that would have daunted a less resolute spirit.

He was one of the founders of the South Congregational Church, Boston, and the oldest officer at the time of his death, which took place at Roxbury on June 7, 1870.

On May 2, 1836, Mr. Reed married Mary Ann Williams, who was born March 28, 1805, and united in herself the blood of the Williams family of Rhode Island and that of Dr. Bentley, of Salem. Her own immediate family were Unitarians before Unitarianism began; and she herself contributed much to the courage and faith of her husband in his work. She lived a long life of unselfishness and cheer, passing away at the age of ninety-five in January, 1900.