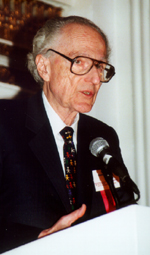 A psychiatrist who has devoted his life to fighting for the needs and rights of American children, David Hamburg, M.D., has been a major influence on generations of policymakers. Hamburg has written about building parental competence, strengthening social support networks by bringing generations together, and child development.

David Hamburg, president emeritus at Carnegie Corporation of New York, served as its president from 1983 to 1997. He was also the president and then chairman of the board of the American Association for the Advancement of Science, and president of the Institute of Medicine, National Academy of Sciences from 1975 to 1980.

A world-renowned researcher, his work has encompassed the areas of human aggression and conflict resolution, links between behavior and health in illness, and child and adolescent development. As a professor and chairman of the Department of Psychiatry and Behavioral Sciences at Stanford in the 1960s and early 1970s, Dr. Hamburg was responsible for encouraging Dr. William C. Dement, now often called “the father of sleep medicine,” to pursue his studies in sleep medicine at the university. Dr. Hamburg is the recipient of the Presidential Medal of Freedom, the highest civilian award of the United States.

—Courtesy of Medal of Freedom

Click here for supplemental reading about David Hamburg on Amazon.