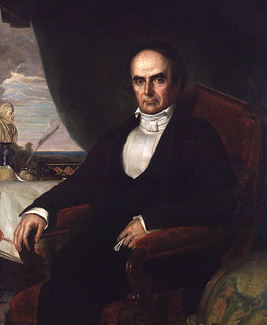 John Lothrop Motley said, “Thinking of America without Webster seems like thinking of her without Niagara or the Mississippi.”

Born in New Hampshire, he was a graduate of Dartmouth College, whose Webster online exhibit describes the last days of this defender of the Constitution:

“Few have left such a lasting mark on all three branches of American government. Webster’s cases before the Supreme Court are cited daily as the foundations of American contract and the supremacy of the Constitution over the states. The Webster-Ashburton treaty and his work as Secretary of State averted a third war with Great Britain, and ushered in a new era of peace. It remains a founding document in the law of nations. Webster’s portrait appears no fewer than six times in the U.S. Capitol, a tribute to the man who three times averted civil war and epitomizes what is now called ‘the Golden Age of Senate Oratory.’ Lincoln later cited Webster’s words as an important source of inspiration in guiding the nation through the Civil War. And if, as his critics contended Webster sold his soul by compromising on slavery, he did so only to purchase a few more years of peace for a troubled nation and to preserve the Constitution and the Union he so dearly loved.”