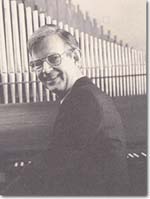 The esteemed American composer, organist, choral conductor, and teacher, Daniel (Rogers, Jr.) Pinkham, received training in organ and harmony from Carl Pfatteicher at the Phillips Academy in Andover, Massachusetts, before pursuing his studies with Merritt, Piston, Davison, and Copland at Harvard University (A.B., 1943; M.A., 1944). He also received instruction in harpsichord from Aldrich and Landowska, and in organ from Biggs. He likewise attended the composition courses given by Honegger and Barber at the Berkshire Music Center in Tanglewood, and then studied with Boulanger.

Daniel Pinkham taught at Simmons College in Boston, Boston University, and Dartington hall in Devon, England. In 1957-1958 he was a visiting lecturer at Harvard University. In 1958 he became music director of the King’s Chapel in Boston. He also taught at the New England Conservatory of Music in Boston from 1959. In 1950 he held a Fulbright fellowship and in 1962 received a Ford Foundation fellowship. He was awarded honorary Mus.D. degrees from Westminster Choir College in Princeton, New Jersey (1979), the New England Conservatory of Music (1993), and Ithaca College (1994). In 1990 he was named composer of the year by the American Guild of Organists.

In his prolific output as a composer, Daniel Pinkham has demonstrated a fine capacity for producing versatile scores. The formal design of his music is compact and contrapuntally cohesive. The rhythmic element is often propulsive while he occasionally introduces modernistic devices without disrupting the tonal fabric of his scores.

Daniel Pinkham: A Bio-Bibliography by Kee Deboer and John B. Ahouse